or perhaps Nothing Gained Without Effort

It had been a week of rain at home – every day! It did not really matter I thought as I drove toward Black Tail Creek. It had not been raining around that area so of course I arrived to find the creek in spectacular condition, running clear and low and not a footprint in sight. I knew that I would get one good day’s fishing in before I had to partake in a bit of socializing not too far from this magnificent little creek – just a birthday party where they were expecting to have trout on the menu. I did not mind taking a trout from this creek as the population was reasonable and it was not too far for fish to migrate up there. I did not have any high expectations about what I would find at all, as I knew this creek to be productive at the best and worst of times. On the way there, I listened to one of my audio tapes, specifically the one featuring Tony Orman, as this was a creek we both favored. He did not know at first, that I knew about it nor did I know that he knew about it until we started talking trout colour and how some trout had very black tails. It did not take long to work out that it was the same creek we were talking about and that both of us were being pretty cagey about its whereabouts.   After arriving at Black Tail and gearing up, I spent the next 90 minutes or so walking down river so that I could fish my way back up to the car. As I walked and made my way through a series of riverside obstacles I reflected on Tony’s account of his early entry into fishing, days spent in the Manawatu – Mangaone Stream, the Manawatu River, the Kahuterawa, the Tiritea, and other waterways close by to where he grew up in Palmerston North. He had the added advantage of having a father who fished – “not innovative, but keen and could he catch fish in the Manawatu!” He started with a green heart fly rod thread lining using a minnow or gold Devon pattern – swinging it out across and down the river. He said that he would do any sort of fishing, from messing around with worms, eeling, perch fishing, white baiting, and trout fishing. He would get out on his own, even when the river was dirty, he just loved being out. In the early days, he would get so excited that he would yank the minnow out of the fish’s mouth. Although his father continued with bait casting, Tony gradually educated himself into fly-fishing and through striving to achieve he started having success. What was important to him whilst out fishing in the early years was to catch them and if he did not, he was disappointed. When going up the streams he would use little wet flies like the March Brown or Red Governor and catch tons of trout that further increased his motivation to keep going. To Tony, this initial success was what kept him going. In those halcyon days learning the sport, he regaled his first experience of using dry flies – “I thought it was great, I remember a howling nor’ wester and when casting, the fly just fluttered out landing in a pool and I caught 13 trout, not big ones but it was great”. When he lived in Wellington, there was not a lot of time out fishing as his time was divided between rugby, tennis, deerstalking, fishing, and studying to be a land surveyor. Later in Motueka, he fine-tuned hisnymphing techniques and tactics with invaluable help from a school-teaching friend Jim Ring   He mentioned a few of his old mentors- “Jim Ring who taught me about nymph fishing, Palmerston North tackle shop guru Harry Marshall who tied flies and was an expert wet fly fisher, Jimmy Robinson from the Manawatu acclimatization society who fished dries and would catch 12 or 20 small fish in a day on the Kahuterawa while I watched amazed, and John B. Henderson who took me fishing on the Makuri.” These people had an influence on Tony during his early fishing journey. As time went by, he slowly educated himself more about fly-fishing. He loved the sense of achievement that came with his increasing mastery and fine tuning of not only fishing but also whatever sport he was engaged in, “catching trout, shooting a rabbit or whatever”. He talked about how killing a fish took prominence as a youngster and how he now was almost reluctant to kill a fish unless he needed it though he was not adverse to a superb estuarine fish for the table.  He then discussed how catch and release had taken hold and in quoting Shakespeare how he saw it as “a quality of mercy not strained” (I guess in the sense that killing a fish destroys the quality of mercy, that killing it is a conspiracy of violence against a helpless creature), and that trout fishing is hunting, that it was very akin to deer stalking and one had to choose whether to kill or not, and that one could limit the kill. Despite this philosophizing, he said he became quite content to observe and/or enjoy the taking of one for the table though in all reality, he did not rate trout highly as a food – he’d rather have snapper or kahawai. 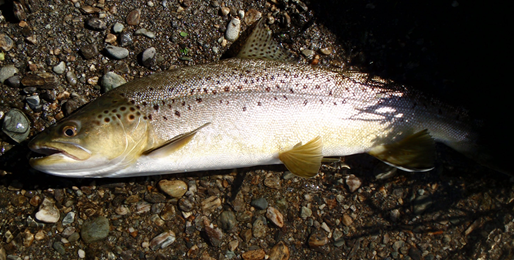 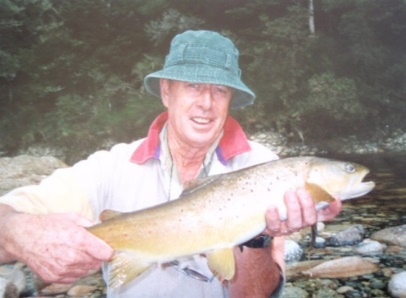 A Black Tail Creek trout. Tony Orman (photo provided by Tony) Tony spoke of how fly fishing was essentially problem solving, that in learning to fly fish nothing is gained without effort, thought, and planning, that development of these were good for one’s character and human make up, and led to one having confidence and self-esteem. He credited his wholeness as a person to his sporting interests and experiences in his outdoor playground. “The outdoors is the best education a kid can have.” Like many anglers and hunters, he was comfortable being alone, preferring a smaller group of friends with qualities such as loyalty and trust rather than engaging with “those given to social posturing”. Over many years he has fished and still fishes with Labrador dogs – “simply wonderful companions.” In talking about his mentors and friends, Tony said that over time he had become very selective in choosing them just like trout are when they are feeding. “Often I prefer a lab to a person,” he laughed. “They always agree with you and they don’t tell others where you’ve been fishing!”   Having developed in his fishing, Tony then took on guiding when required with a bed and breakfast complex he and Bridget ran. Initially, he wondered how he was going to cope with it, of helping people trying to catch a fish. But he did, and thoroughly enjoyed it. He particularly liked Americans for they were full of enthusiasm: he found their conversation delightful and any fish was always a big fish to them. Overall, guiding gave a sense of satisfaction and joy especially when helping, and seeing, someone catch a trout.   The whole time I was out there doing it myself on this Black Tail Creek, I was vicariously living his experiences to a certain extent. I, too, was somewhat a loner (albeit without a Labrador dog), preferring a selective group of friends rather than engaging in social posturing, that fly fishing had been a part of my character development, and just as it had given Tony tranquility and peace, so too had I experienced the same. I had tried a couple of his techniques – the little March Brown across and down, a dry fluttering in the wind to no avail, and nymphing which allowed me to stalk those black tails in a matter that I had to think carefully about the quality of mercy. I too, had developed in my fishing, though only on this day, and I would have been disappointed if I did not get one. Although success was important, it was more about my personal success in knowing that I could stalk these creatures and choose to let them go or not. Like Tony, I set my own limits and needed no excuse to be out there. Just as he had said that fishing was a part of his life, ingrained into his being, so too was it like that for me. I always strived for a similar opportunity, to fish as long as I could, to watch fishrise, to catch fish and, most of all, to just be “out there”.   In being out there I was stalking my prey, I was enjoying myself, and it was magical. I had thrown my line out, with a sharp upstream mend, and a small black bead head nymph on the end, I had cast out across the water with little spider patterns tied securely on, and I had fluttered my line out in the breeze with little dries. Not only had I hooked fish, had them chase my fly as I pulled it back slowly along drop offs, watched as they threw the fly or made a flying leap, I had also been confronted with the quality of mercy and choice as I killed a nice black tail specimen.   Many hours of the day had passed and I was overdue for the party. I did not mind and for a fleeting moment, I was tempted to not go, to stay where I was and enjoy the therapy. But, I had had a good day and thought it time to be on my way. In remembering what Tony had said, “One can go fishing just for an hour and that hour can be quite magical”, I had had many hours and all were magical.   And as I walked back down the track in the early evening, I thought how true it was, what he had said to me all those years ago – “Fishing is leisure. It’s meant to be fun. One thinks clearer out there; getting out on the river – the mind tends to be……… Work, worries or whatever, fishing takes your mind off it and that has to be a good thing. At stressful times which everyone experiences, I would have gone bonkers if I hadn’t had my hunting and fishing therapy”. I had had my share of therapy at our Black Tail Creek.

Heat barbecue with hood closed. Slash a few shallow cuts on each side of the trout. Place trout on a large piece of tin foil big enough to wrap like a parcel. Mix sumac, garlic, ginger, cumin, and oil together in a small bowl. Rub into the slashes on both sides of the trout. Place lemon slices inside cavity with half of the spring onions and then season trout inside and out. Fold the foil around the trout sealing the edges. Place on heated barbecue with hood closed for approximately 30 minutes. To serve, unwrap the trout and transfer to a serving dish and drizzle over the lemon juice and remaining spring onions.

This entry was posted in Articles, Home. Bookmark the permalink.