Background to the testing

Having previously been asked to help Dr Mike Joy obtain water samples from private rural wells for a scoping study related to human health which Mike undertook while in Canterbury to test surface waters for North Canterbury F&G, and having observed the accuracy and simplicity of Mike’s optical nitrate sensor, it seemed this was an instrument the NZFFA should obtain to monitor local rivers and streams.

My initial focus centred on the spring creeks within the hapua zone of the Rakaia River connected to the lagoon as I had noticed a marked decline in fish numbers in these streams. Ecan had been conducting monthly water testing of these streams from 2009 until September 2014 which stopped “due to lack of funds”. I was concerned that nitrate levels in Mathias Creek had been rising steadily and peaked around 6.9 mg/L NO3-N in 2014 due to farmland development carried out by Rakaia Island Dairies.

My testing from August 2019 showed that nitrate levels had dropped back to less than 2.6 mg/L in Mathias Creek and much lower levels were evident in the other creeks in the hapua zone. It seems other factors such as a marked increase in sediment, and the loss of flow variability due to increased water abstraction from the main Rakaia braids might better explain the marked decrease in the abundance of native and recreational fish.

The Barrhill Chertsey BCI Irrigation Scheme was allocated 17 m3/sec of the Rakaia River flows in 2010, which was able to be fully accessed from 2012, following the decision of the Lake Coleridge Project (LCP) Hearing to approve altering the flows proscribed in the Rakaia River NWCO (1988). When stage II of the Central Plains Water CPW enhancement irrigation scheme was completed by October 2018 a further 40 m3/sec was taken from the Rakaia River.

I extended the range of our testing to include the lower Selwyn Water Zone from the Rakaia Huts to the Hallswell River and the Ashburton and Hinds Water Zones. While Ashburton and Hinds have historically had high nitrate in the groundwater as recorded in Ecan reports from the 1980s, the Selwyn Water Zone had a lower baseline due to limited irrigation in this zone. In a submission to Ecan in 2012, deposed Ecan councillor Eugenie Sage stated that it would be reckless and irresponsible to proceed with the CPW scheme until the means and regulations to manage the leaching from the out of river use of the Rakaia water were in place. The CPW scheme doubled the irrigated area from 30,000 ha to 60,000 ha.

This was the reason I focused on monthly testing of the lower Selwyn water Zone.

Sadly my testing confirmed Eugenie was well informed and the Selwyn District is now showing high nitrate levels in groundwater sourced rivers and streams connected to the massive dairy platform that was enabled by CPW. Both aquatic ecosystems including recreational fisheries, and Public health, are at risk from increasing levels of nitrate due to diffuse nitrate leaching through the vulnerable porous Central Canterbury soils.

The NZFFA had been asked to conduct testing of wells for rural residents by concerned residents in the Selwyn Water Zone at Springston South and more recently we tested water at Dunsandel in conjunction with Greenpeace.

Several residents with high results, (some exceeding the NZ maximum allowable level of 11.3 mg/L), reported being affected with cancer adding to the growing body of evidence that high nitrate levels in drinking water pose an unacceptable risk to humans.

Two once prolific trout rivers/streams – the Selwyn River and Harts Creek now have nitrate levels that are directly toxic to trout eggs and fry. Silverstream in the Waimakariri water zone, the lower Hinds River, and two other South Canterbury streams also have toxic levels of nitrate. NC F&G reported a stream in the Culverden basin has nitrate levels above 10.0 mg/L NO3-N.

Dr Joy forwarded me a recently published study that found no nitrate intolerant macroinvertebrates were found in all 20 Canterbury waters covered in this study.

The NZFFA results are typically worse than those reported by Ecan on the LAWA database which does little for local anglers, trust in their regional council.

The NZFFA reported the seriously degraded Selwyn River to Ecan in October 2020 and asked for a report outlining the “immediate practical steps” Ecan is obliged to take to restore the river. Despite two follow up requests, the CEO of Ecan has yet to provide the promised report.

A recently received LGOIMA request revealed liberal consents for the various landlocked meat plants and massive dairy factories in the Selwyn District to discharge nitrate containing waste onto farmland plus the records of monitoring by Ecan. I.e consents to convert point source factory pollution to diffuse pollution across farmland.

Clearly the nitrate contamination of Canterbury’s groundwater can no longer be solely blamed on urine from dairy cows.

At the end of two years of monthly testing of surface water in the Selwyn zone and limited testing of Mid Canterbury it seems nitrate pollution of Canterbury’s groundwater (and groundwater sourced streams), is getting worse despite Ecan’s assurances to the contrary.

NZFFA plans to expand our testing program in Canterbury, and if possible, in other regions of New Zealand. This will depend on our success in obtaining the necessary funding.

NB the Selwyn River flows were connected to the upper tributaries for the June and July 2021 tests due to the May/June floods resulting in lower nitrate pollution levels for these months.

14 of 19 freshwater ecologists/scientists of the Scientific Technical and Advisory Group STAG recommended the Ministry for the Environment adopt a “bottom line” for nitrate in freshwater of 1.0 mg/L NO3-N

From 5.0 mg/L NO3-N there is evidence of underweight babies &/or short term pregnancies

A Danish study shows a correlation between nitrate in drinking water and cancers, primarily bowel cancer where the risk doubles for every 4 mg/L increase in NO3-N above 0.87 mg/L.

An Otago medical research team has stated that there is a probably link between nitrate in drinking water and bowel cancer.

Following the COVID outbreak the Government ended funding to continue this investigation.

The NZFFA has conducted over 500 tests of rural well water. If the samples are selected for results much above 8.0 mg/L the rates of reported cancer increases markedly (estimated 2 – 5%) 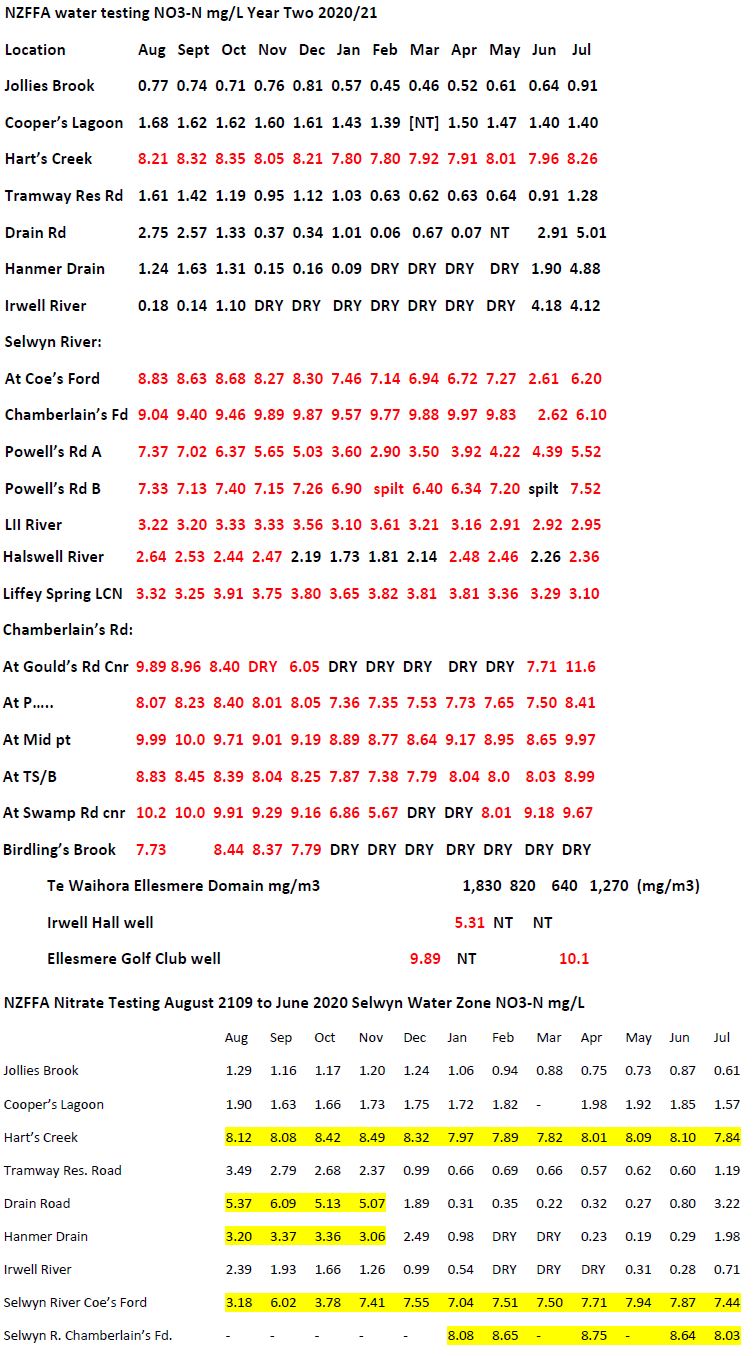 The Selwyn River, (Waikirikiri “river of stones”), is the most polluted river in the Selwyn Water Zone. Ecan has had to erect warning signs advising people who use the once popular camping sites at Chamberlain’s and Coe’s Fords, not to drink the water as the river contains the extremely dangerous E.Coli 0157 on occasions and frequently has high levels of toxic algae putting both humans and dogs at risk.

Trout can survive the high levels of nitrate but not their eggs and fry. Observable effects of direct nitrate toxicity occur from about 2.5 mg/L NO3-N and lethal levels are reached between 3.5 and 6.5 mg/L depending on salmonid species and other water quality parameters.

Members of the macroinvertebrate community index, MCI, that are intolerant of nitrate are absent form this part of the river.

Excessive nutrients, (from around 1.0 mg/L NO3-N), encourage prolific growth of aquatic plants. This is problematic as dissolved oxygen reaches peaks in mid-afternoon due to photosynthesis and falls to potentially lethal low levels around 4.00 am when plant respiration releases CO2 in place of oxygen.

The levels of nutrients are so high that the “fertigation” of the shingle margins of the flowing water allows macrophytes or aquatic plants to grow profusely up to 2 meters high in the summer.

Opportunist migrants were harvesting the dense beds of watercress for sale to supermarkets until a report was made to MPI prompted by Public Health concerns – the potential presence of E. Coli and other waterborne diseases associated with cattle faeces.

In October 2020 a delegation from the NZFFA reported the degraded state of the lower Selwyn River to the full council of Ecan after an unsatisfactory response from Ecan’s compliance manager.

This meeting appears to have achieved very little. The discussion centred around who was not to blame, and a promised report from Ecan’s CEO on what action would be taken has yet to be received by the NZFFA.

The Selwyn Water Zone Committee, one of 10 zones committees established by the Canterbury Water Management Strategy, appears to have ignored the state of the Selwyn River claiming the high nitrate levels are “historic”.

The Selwyn Water Zone Committee has set an upper limit for groundwater in their region of 8.5 mg/L.

It is hard to see how this will reduce the level of nitrate in lowland rives who are fed by groundwater!

The non-statutory CWMS was established by the Canterbury Mayoral Forum in 2009 in response to a 1998 drought in Canterbury.

It was given legal primacy by the Environment Canterbury Temporary Commissioners and Improved Water Management Act 2010, (ECan Act), over the water section of the RMA 1991.

The CWMS, (in essence an irrigation strategy), set about scoping all the potential water that could be used for irrigation in Canterbury, identifying the water sources that could be harvested economically, and set about building infrastructure to use the harvested water with greatest efficiency to irrigate the maximum area possible.

The CWMS goals to increase irrigated land in Canterbury have been largely met or exceeded.

None of the CWMS goals to enhance aquatic environments or recreational fisheries have been met. During this time pollution of ground and surface water by nutrients and pathogens has increased, while surface and groundwater remains over allocated across much of Canterbury.

The Ecan Act which was passed under urgency by John Key’s government to facilitate the expansion of irrigation in Canterbury by removing access to the Environment Court, debasing the region’s WCOs, and through the appointment of commissioners answerable only to Central Government, was repealed in 2016. This should have ended the statutory authority of the CWMS.

To date Ecan has failed to achieve measurable success in managing both the over allocation and freshwater pollution in Canterbury.

This is due to Ecan having few tools to reverse the diffuse pollution and over allocation of freshwater in Canterbury.

To date Ecan is relying largely on the un-validated and un-verified OVERSEER model to develop “farm environment plans” much to the delight of environmental lawyers and agribusiness.

Public Relations spin and landscaping make up the balance of Ecan’s freshwater management.

“The pollution is “in the post” from past farming practices”

Ecan, the region with the greatest resources, has carried out the least monitoring and enforcement of any region in New Zealand.

It seems for Canterbury at least cows take priority over the regions aquatic ecosystems and Public Health.

The public have funded the bulk of the irrigation development. The public have lost once internationally and nationally recognized recreational fisheries. The public have lost 12,600 ha of riparian margins to agricultural encroachment putting communities and farmland at risk from flooding. The public have seen the populations of specialized fish and birds associated with the region’s iconic braided rivers drop precipitously. Rural folk have had to take ownership of increasingly polluted wells for drinking water. The community has become divided between the polluters and polluted.

Recently Ecan increased the region’s rates due to the costs of implementing and overseeing the questionable farm environment plans.

The future does not bode well for future generations of Cantabrians until this region’s freshwater can be effectively managed.

It seems greater action by activist groups such as F&B, Greenpeace, AWA, NZFFA, and others is needed to hold both Central and Regional Governments to account.