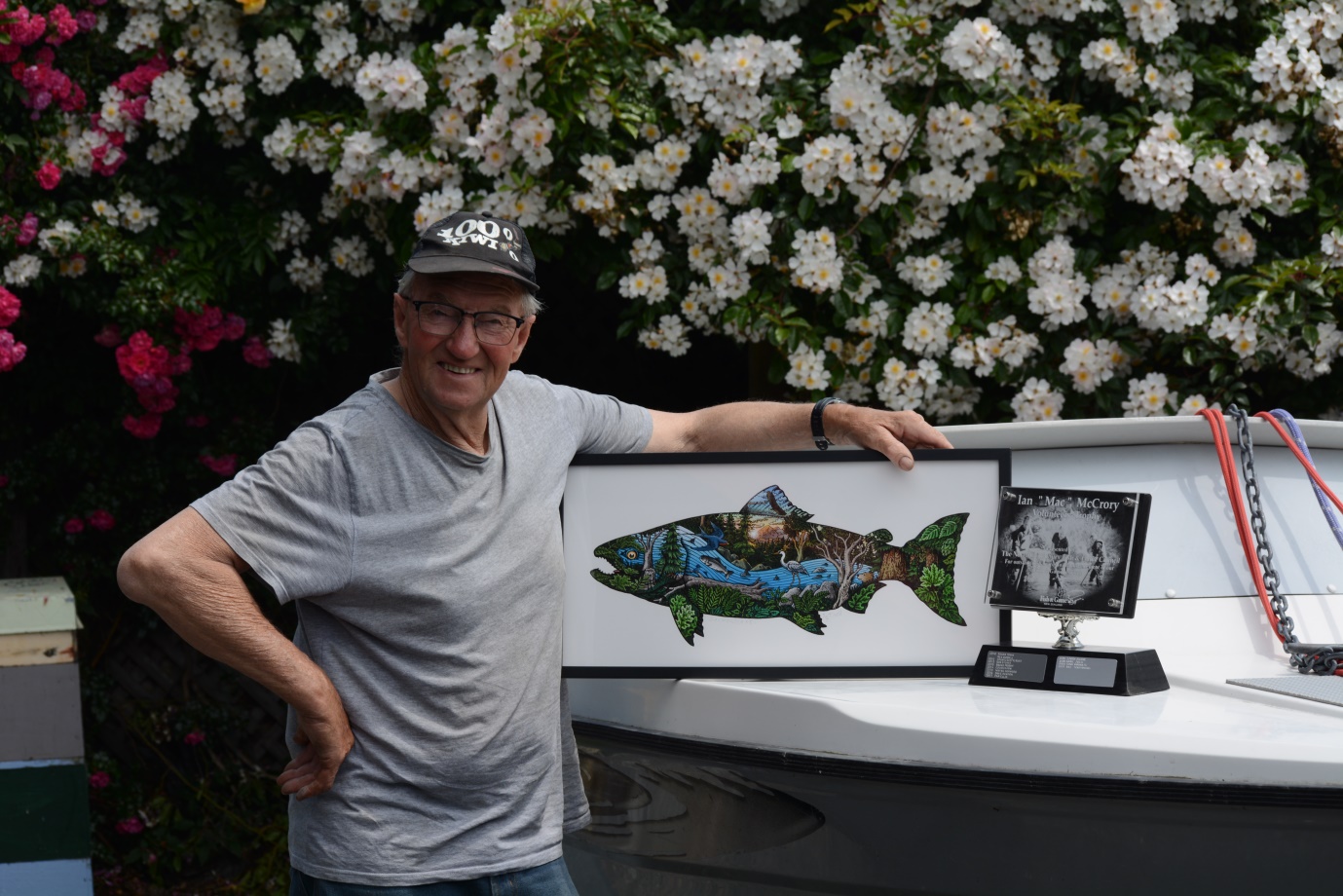 Bill Southward was a popular recipient of the Ian McCrory trophy for the volunteer of the year award at the December Annual General Meeting of North Canterbury Fish & Game.

In recognition of Bill’s outstanding life-long work NC F&G included an attractive framed picture of a fish with the award.

Still active at 77 Bill continues to be active in assisting with the fish surveys of the native fish that inhabit the Rakaia River hapua or river mouth that commenced after fishermen’s concerns about the dramatic decline in Stokell’s smelt finally prompted a formal investigation by NIWA, DOC, F&G, and ECan in 2020 to compare fish populations with the most recent available database (1980s!).

Until the latest election Bill was a NC F&G councillor.

As important as his physical contribution is his fund of experience and photographic records which this second generation Rakaia Huts resident has accumulated over the past 50 years. Bill has recorded many of these images on DVDs to help the academics and “experts” gain some baseline understanding of the coastal reaches of the Rakaia River, once a truly outstanding fishery that is now in serious decline due to losses of river flows to irrigation abstraction.

I first became aware of Bill’s passion for the Rakaia when I commuted from working on the West Coast to make my submissions against the Lake Coleridge Project at the Ecan managed Hearing in 2012. I learned Bill and his wife Averill did not miss one day of this hearing.

Bill’s consistent attendance at meetings and talks with Ecan, NIWA, Canterbury University, F&G, and other local fishing groups has helped him build knowledge through his contact with scientists and council staff. His deep knowledge is both a resource for academics and a spur for reluctant regional council staff and councillors.

I meet up with Bill frequently on my evening visits to the North Rakaia interrupting his bee keeping. It is usual to exchange information on the fishery and recent advocacy activities the NZFFA or Bill might be working on.

Bill made a brief and modest speech at the F&G AGM indicating his pleasure at being singled out for the award.

He concluded his speech by emphasising the power of photographs, and told those who attended the AGM to remember to use their smart phones whenever they come across items of interest when on the river. Large braided rivers such as the Rakaia River have received little attention from the scientific community in the past and current studies are a politicized and belated attempt to understand why these rivers are in trouble. Despite the fact that many anglers know more about their rivers than academics, angler anecdotes carry little weight at council hearings. Photographic evidence is harder for council staff to deflect.

Good on you mate.