The loss of native and recreational fish from Canterbury’s hapua appears related to lower residual flows and the loss of the variable flows that define braided rivers due to excessive water abstraction for irrigation. 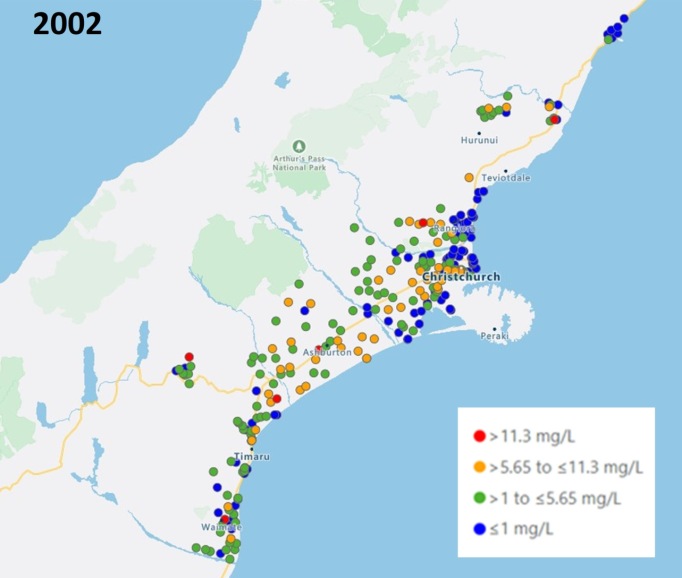 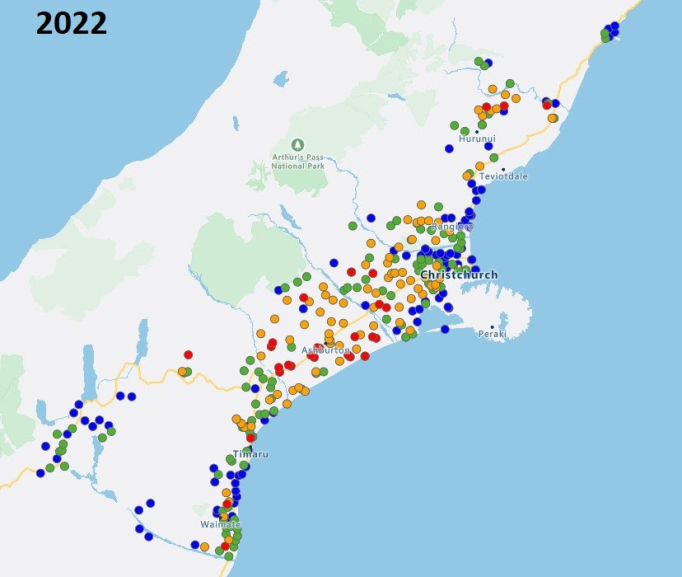 The NZFFA initially conducted testing of surface and groundwater in the Ashburton and Selwyn Districts. We found high levels of nitrate in groundwater NE of Ashburton, near Tinwald & Winslow, and in Hinds Township.

The Hinds River tested > 7.0 mg/L NO3-N in its lower reaches. A couple of permanent drains along the Lowcliffe coast exceeded the Maximum Allowable Value for drinking water (11.3 mg/L)

To reduce travel costs and because the Selwyn District had a lower nitrate baseline prior to the Central Plains Water irrigation enhancement scheme it was decided to focus on the surface waters of the lower Selwyn area.

Rural residents who drink from private wells are left to manage increasing concerns about the health risks from drinking nitrate polluted water themselves. 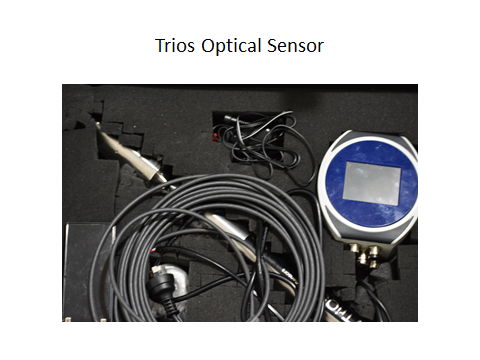 With the assistance of Pub Charities NZ, and a generous discount from the instrument supplier, the NZFFA was fortunate in obtaining an optical sensor of our own to conduct nitrate testing

Nitrate polluted groundwater is not a legacy issue. It is an emerging crisis due to the (in)actions of this generation

Ecan’s director of science repeatedly attempts to reassure us by stating; Nitrate pollution of Canterbury’s aquifers is a legacy issue of past farming practices, it is “in the post”, it will get worse before it gets better.

Tim Davie ignores the “legacy issue” being created from increasing the number of cows in Canterbury from around 100,000 to 1.3 million a decade or more after this MOW report was written.

Why the test the Selwyn Water Zone?

The LWRP appears flawed due to its over reliance on models in lieu of adequate data and its vulnerability from the politics of self-interest.

“It would be reckless and irresponsible to proceed with CPW before the means and the regulations to manage nitrate leaching from the out of river use were in place.”

Chair of the independent commissioners Hon. Peter Salmon determined that consents to use the Rakaia River water were outside the scope of the LCP Hearing and would be the subject of future hearings

These soils retain virtually no nitrate

Humans are at risk from drinking water from nitrate polluted wells

Kincheloe et al. (1979) reported larval mortality of Chinook salmon, rainbow trout, and cutthroat trout at concentrations as low as 2.3 to 7.6 mg/L NO 3 -N. 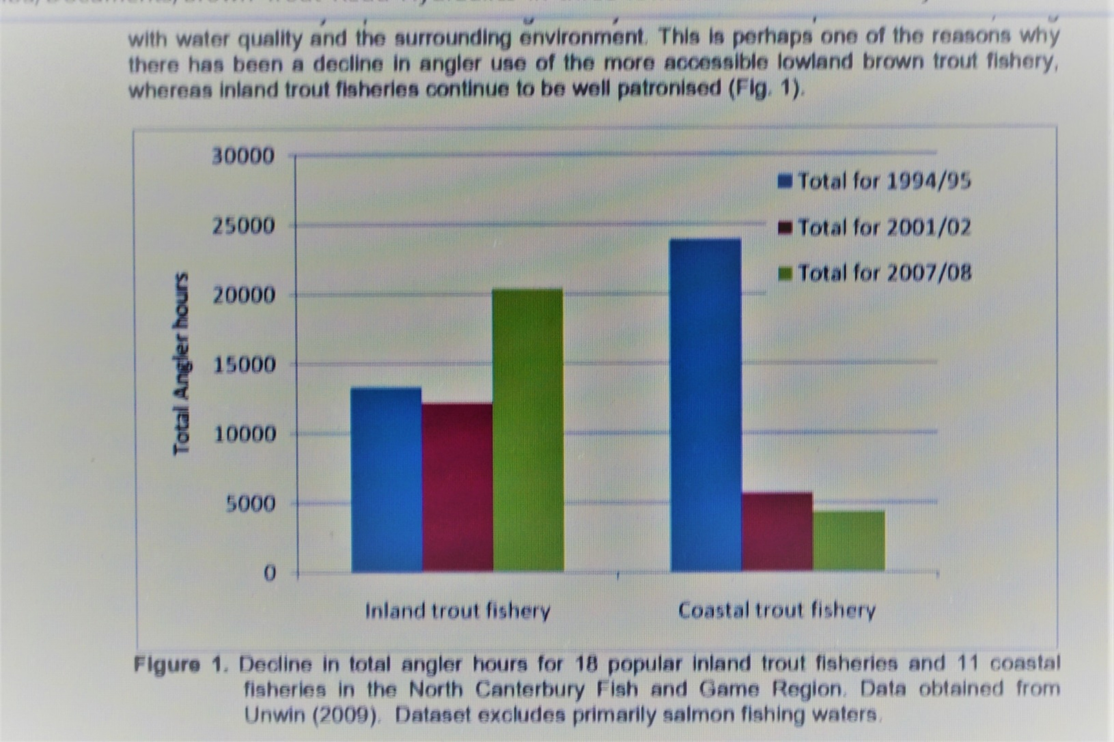 THE SELWYN RIVER OF NEW ZEALAND: A BENCHMARK SYSTEM FOR ALLUVIAL PLAIN RIVERS 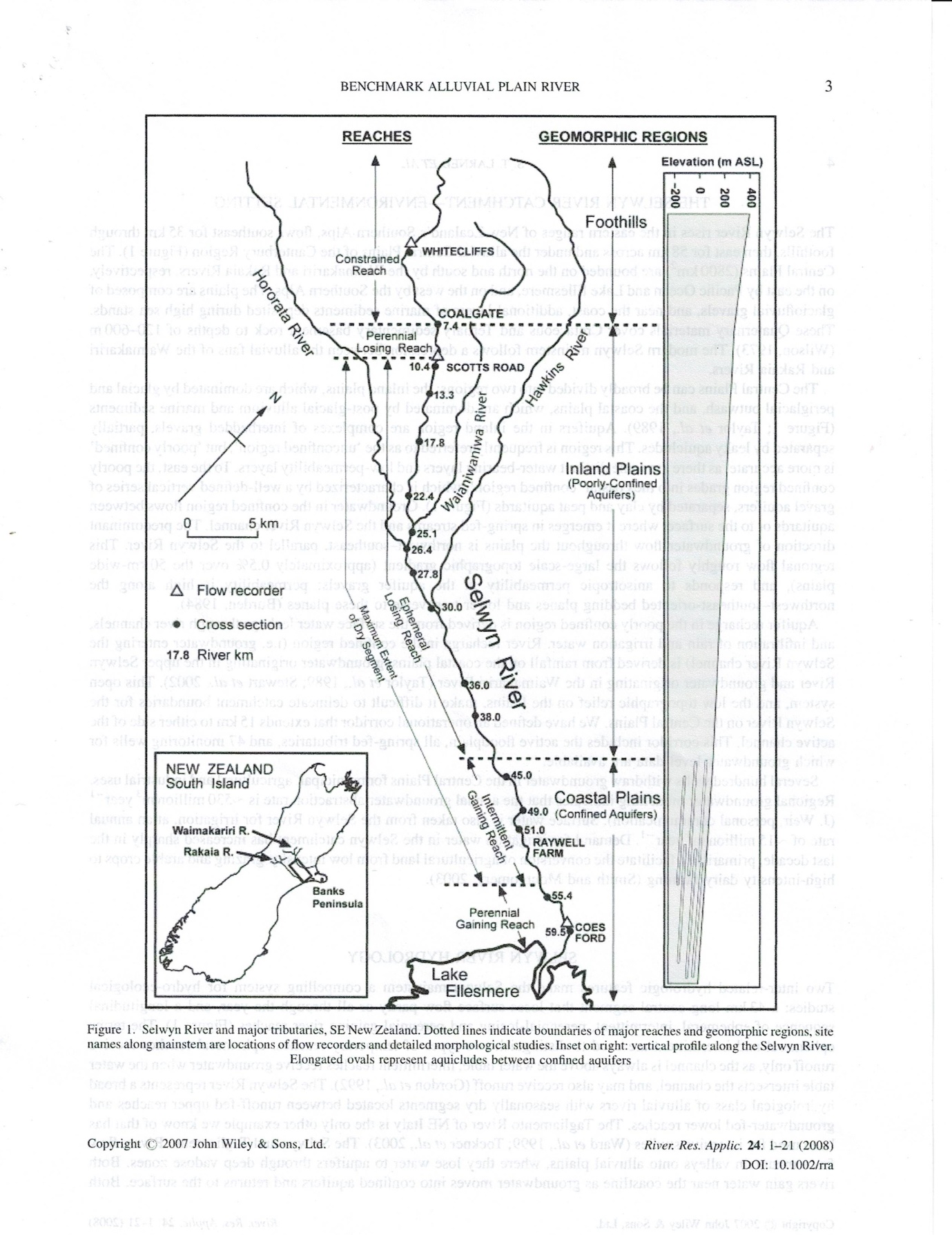 The Selwyn is a remarkably complex river.

Hydrological properties that characterize the Selwyn include strong surface water– groundwater interactions, contiguous ephemeral, intermittent, perennial-losing and perennial-gaining reaches and an expanding and contracting dry segment that persists for most of the year

The following graph and series of photographs show how the Selwyn River changes over the seasons. Rare flood events are large enough to strip the bed back to bare shingle revealing Waikirikiri as “the river of stones”, or the bed becomes clothed in a luxuriant growth of macrophytes & weeds growing hydroponically among the stones thanks to the nitrate rich groundwater that is its predominant source when the middle reaches of this river dry up.

The NZFFA monthly sampling was not truly randomised but reflected the times that suited the volunteer water sampler. The photographs are evidence that the testing occurred over times of high and low flow. (Ecan flow records have been recorded on some test days).

The Selwyn River is connected to the inland unconfined Central Canterbury aquifer now polluted by industrial farming for up to 15 km from its margins. The Selwyn River might be likened to a funnel draining nitrate enriched groundwater into Te Waihora (Lake Ellesmere). In colder months when the algae in the lake stop taking up nitrate the lake water tests up to 4.5 x the NPS FM “bottom line” for New Zealand lakes making Te Waihora one of the most nitrate polluted lakes in the country.

The low results occur when the Selwyn River is connected at the surface with its upper tributaries.

The Selwyn River differs from the Hinds River in that nitrate levels drop somewhat from Chamberlain’s to Coe’s Ford. This might be due to the river receiving adjacent groundwater that is less polluted or simply reflect the uptake of nitrate by aquatic plants between the sampling sites. By contrast nitrate levels in the Hinds River increase as this river travels to the coast. 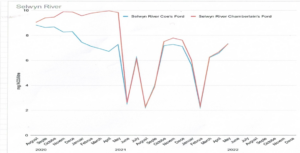 From the LAWA NZ records of Nitrate pollution at Coe’s Ford;

Hart’s Creek by contrast is solely sourced from groundwater.

It appears likely from limited samples of connected springs and wells that the consistently high levels of nitrate have their primary source as far away as Dunsandel and Bankside. The soils in this part of the Selwyn District are particularly shallow and porous. This is an area of large dairy farms with the Synlait dairy factory and two meat processing plants applying factory waste to land 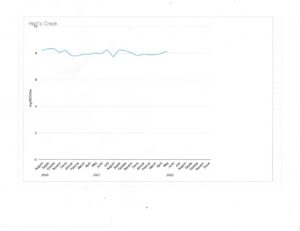 Several drains along Chamberlain’s Road consistently show very high nitrate levels although when the flows diminish due to local irrigation abstraction and luxuriant aquatic plant growth is occurring, nitrate levels may fluctuate by around 2.0 mg/L

It is beginning to appear that these short run drains are connected to highly polluted groundwater. My guess is that the AFFCO meat plant near Burnham and The Pines Sewage Plant servicing Rolleston and other satellite towns across the Selwyn District are influencing these results.

It is legitimate to treat wastewater by applying it to land if there is a sufficient area of land with suitable soil types available for the purpose. My results lead me to suspect this is not the case. 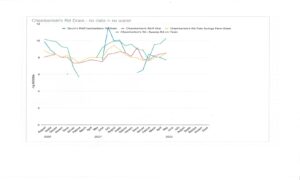 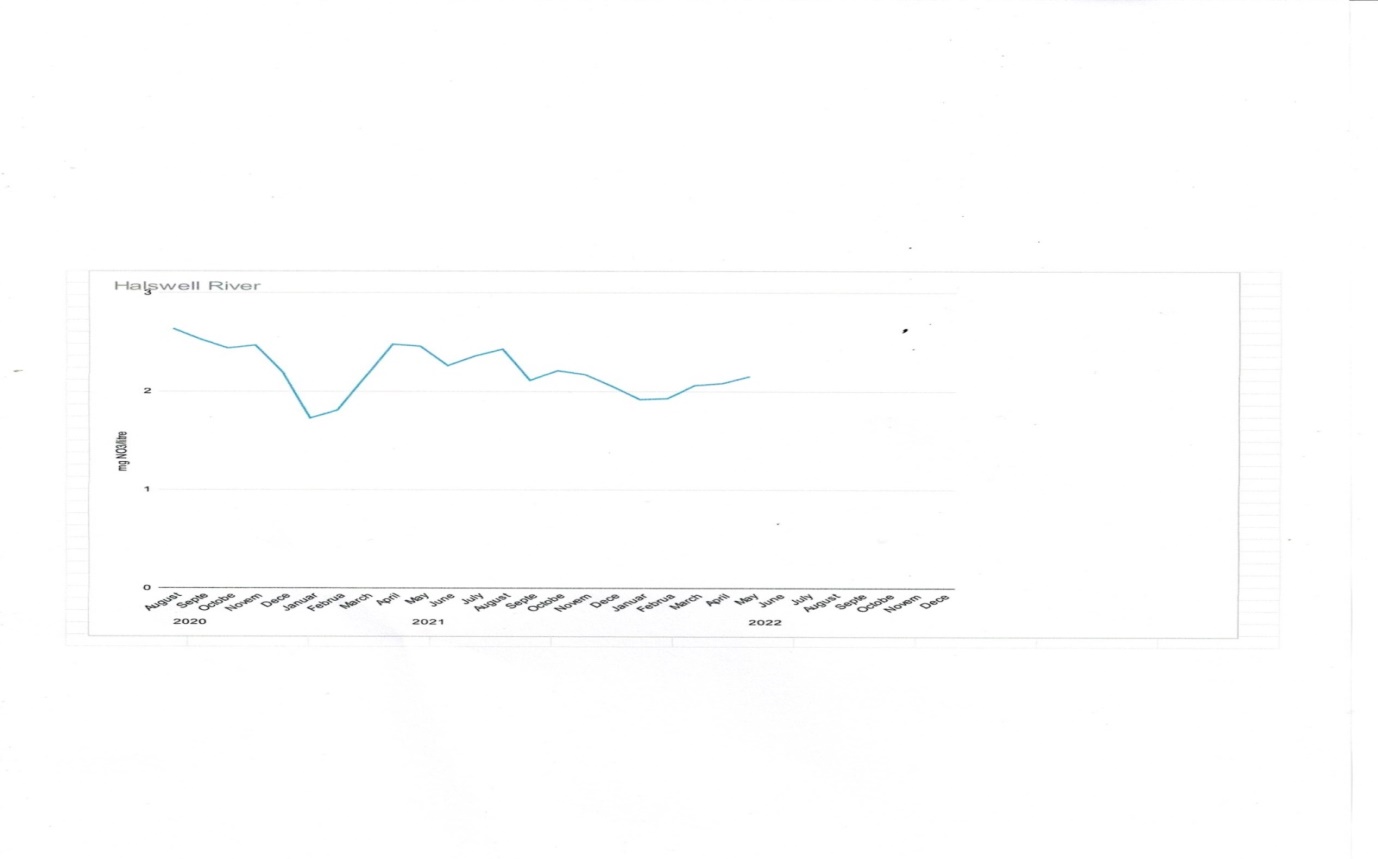 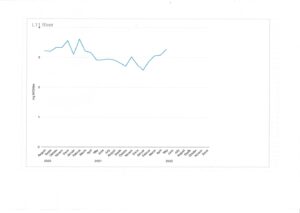 Water pollution is not just about nitrate

Excess nutrients such as nitrate create another problem for the lower Selwyn River in the form of toxic algae.

Waterborne pathogens from cow faeces can also pass through Canterbury’s porous aquifers resulting in the extremely dangerous O-157 strain of E.Coli being cultured from the Ashley, Selwyn and Rangitata Rivers.

While collecting water samples I was concerned to come across a gang of first generation New Zealanders commercially harvesting the prolific growth of watercress along the margins of the Selwyn River at Chamberlain’s Ford. A casual inquiry indicated this was being sold to Christchurch supermarkets.

As a onetime meat vet with a focus on public health I felt a duty to report this to MPI and the activity has ceased. 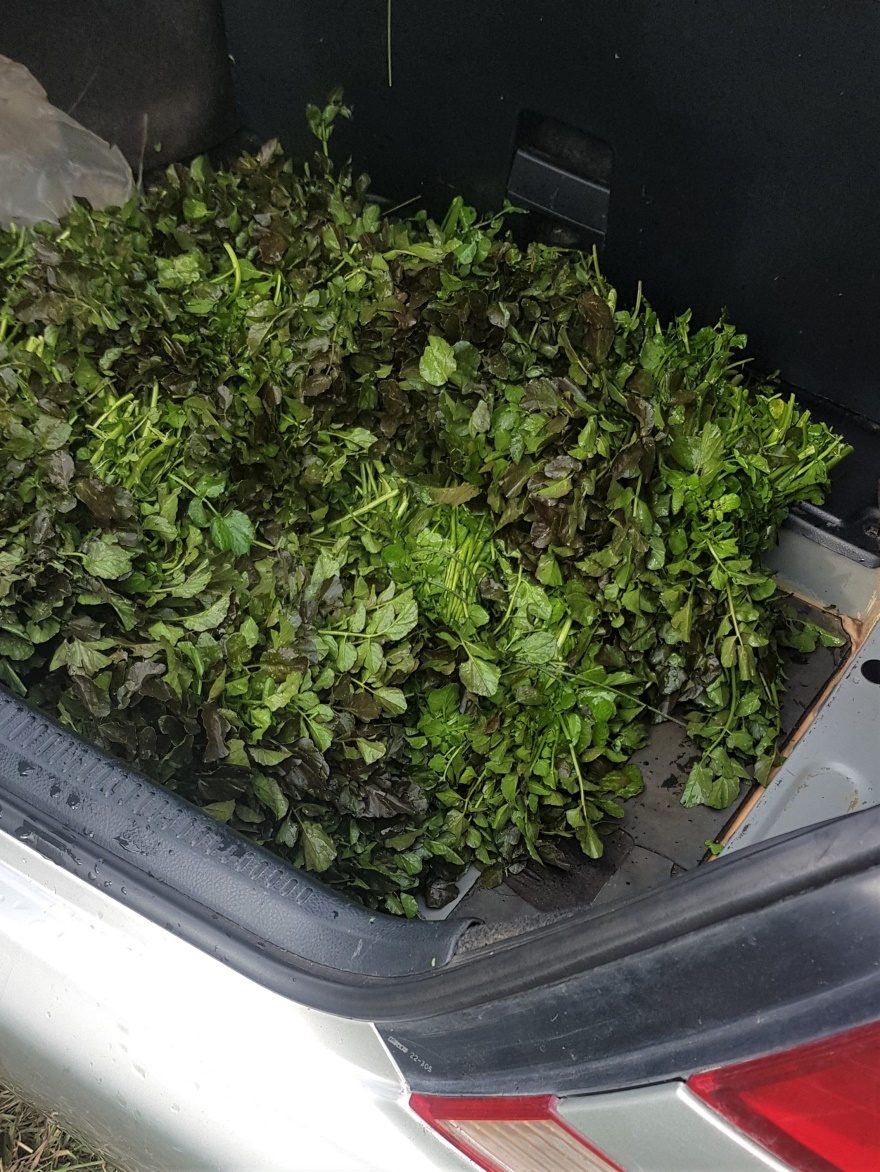 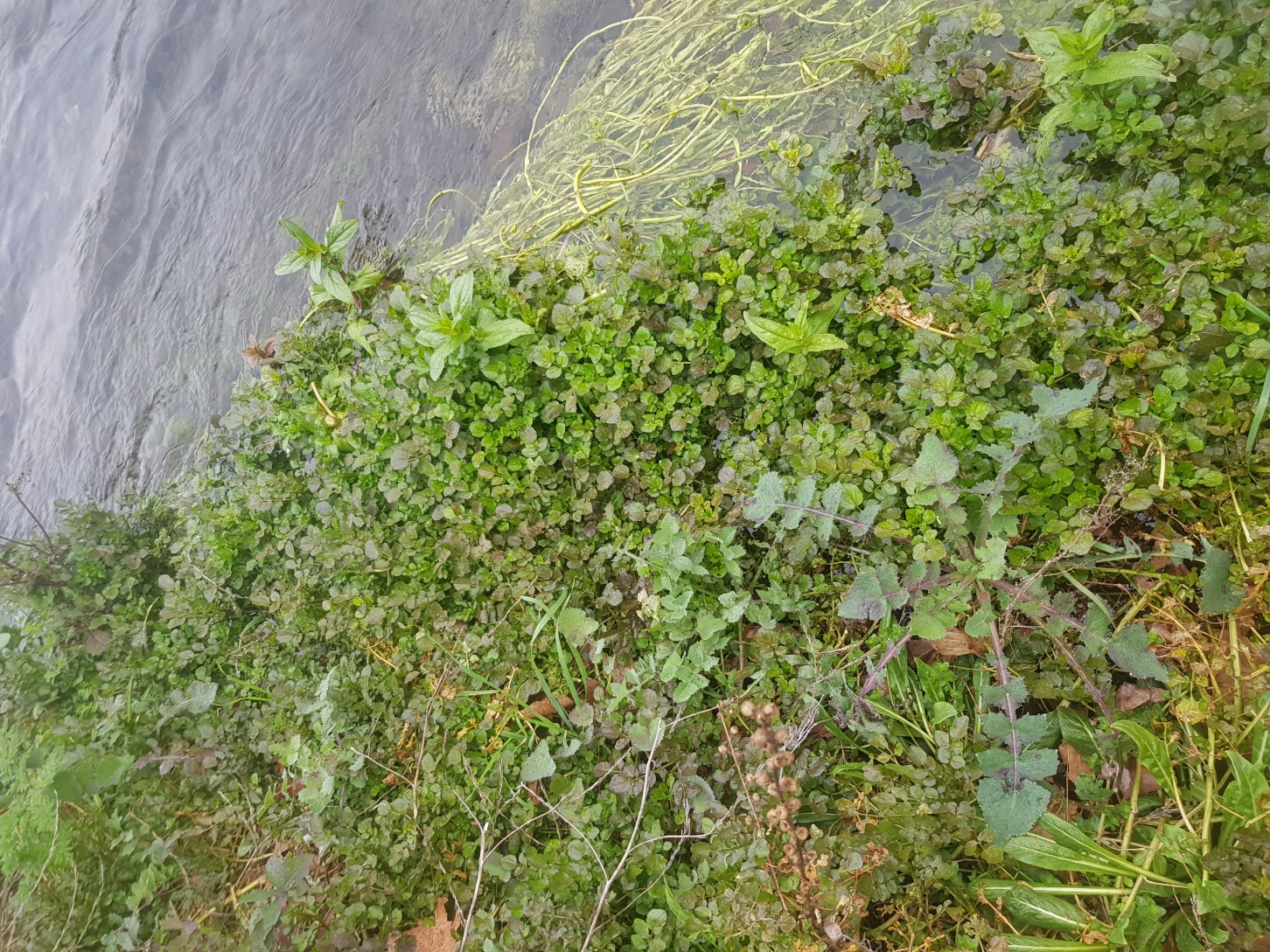 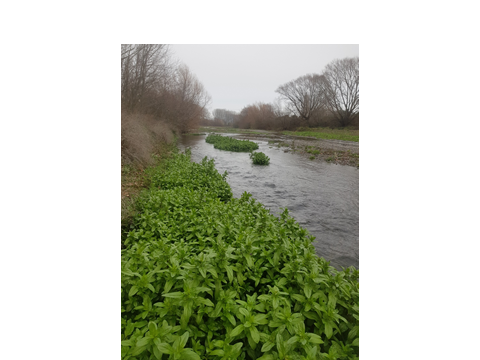 Weeds on the shingle beaches growing (hydroponically) to head height 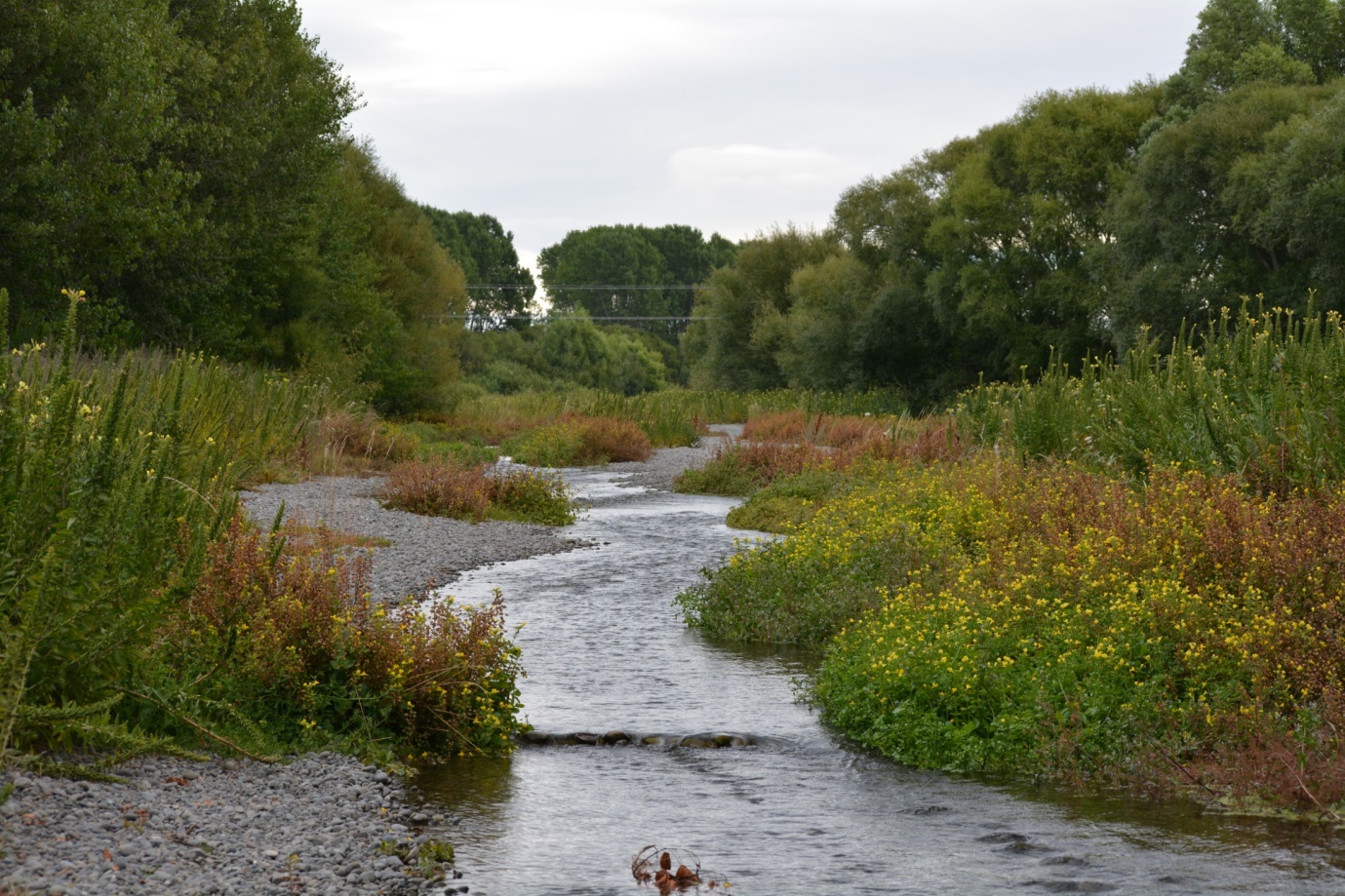 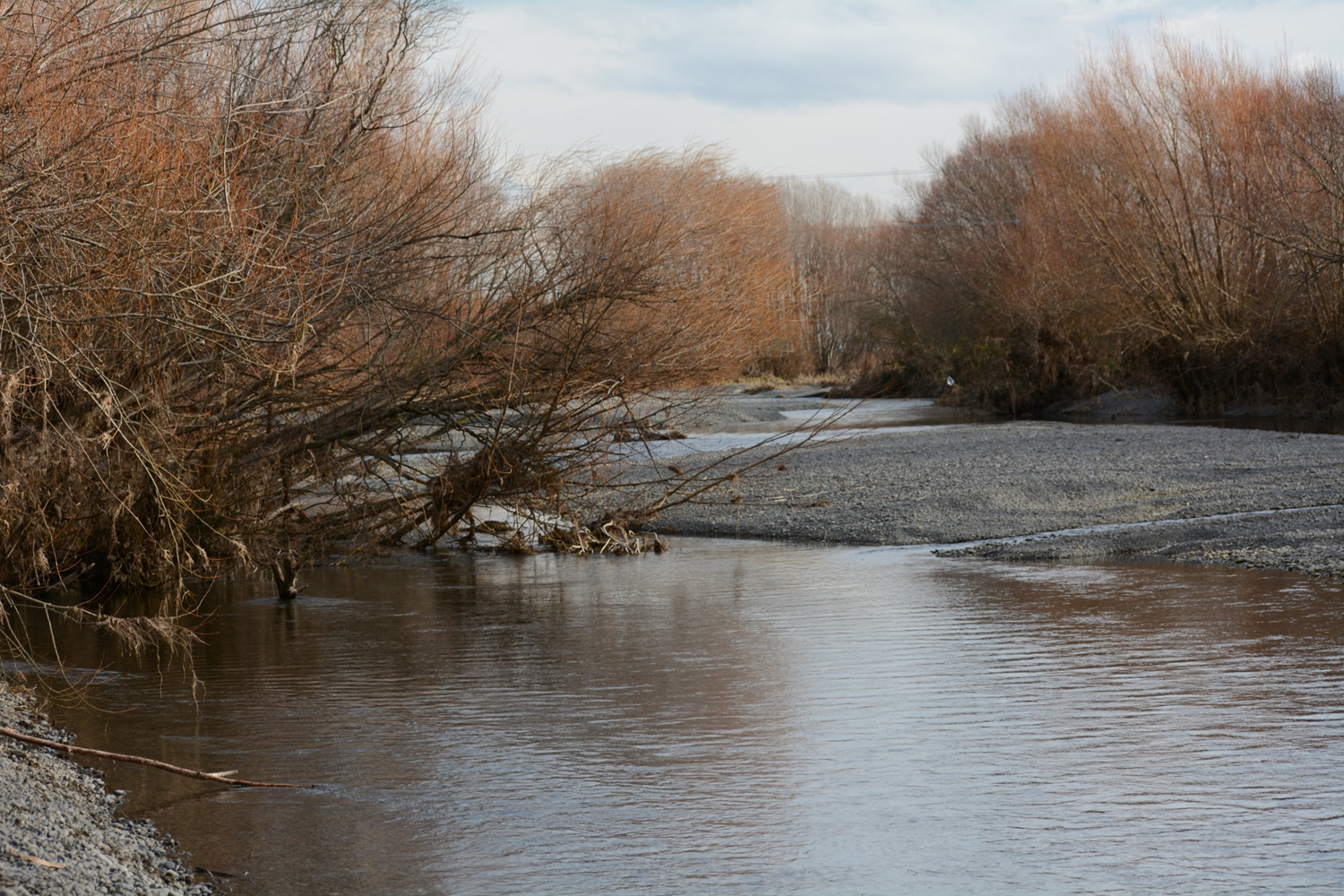 Plants re-establishing after the flood 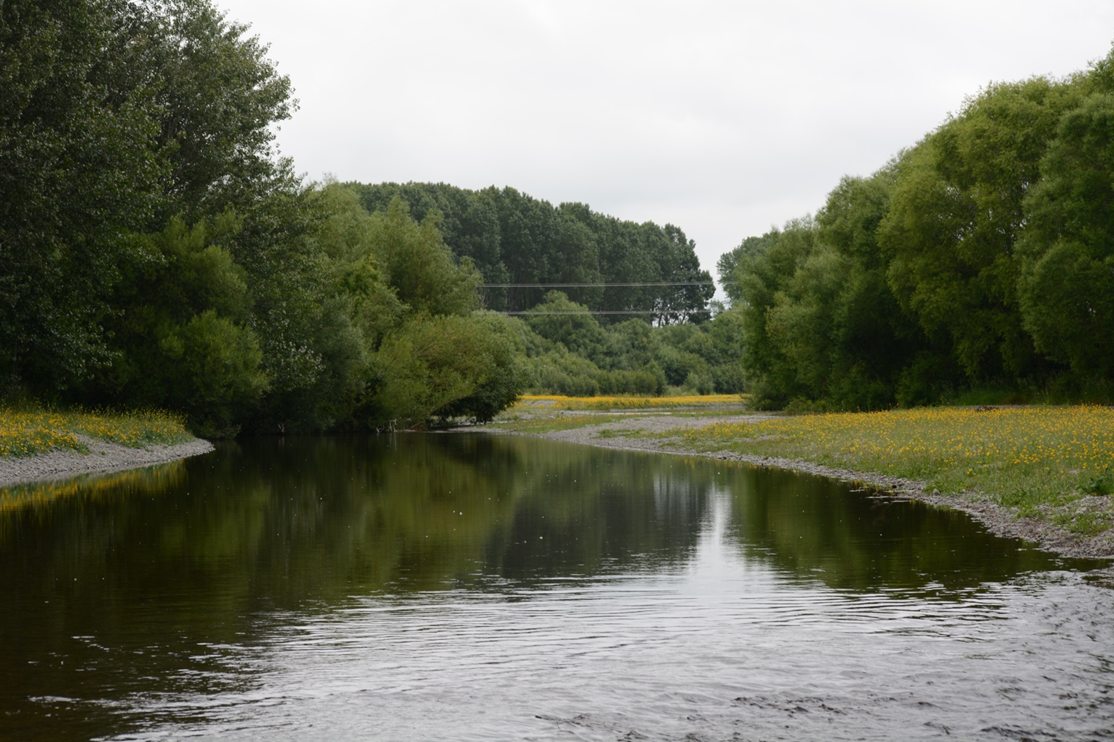 Chamberlain’s Ford reduced to a trickle 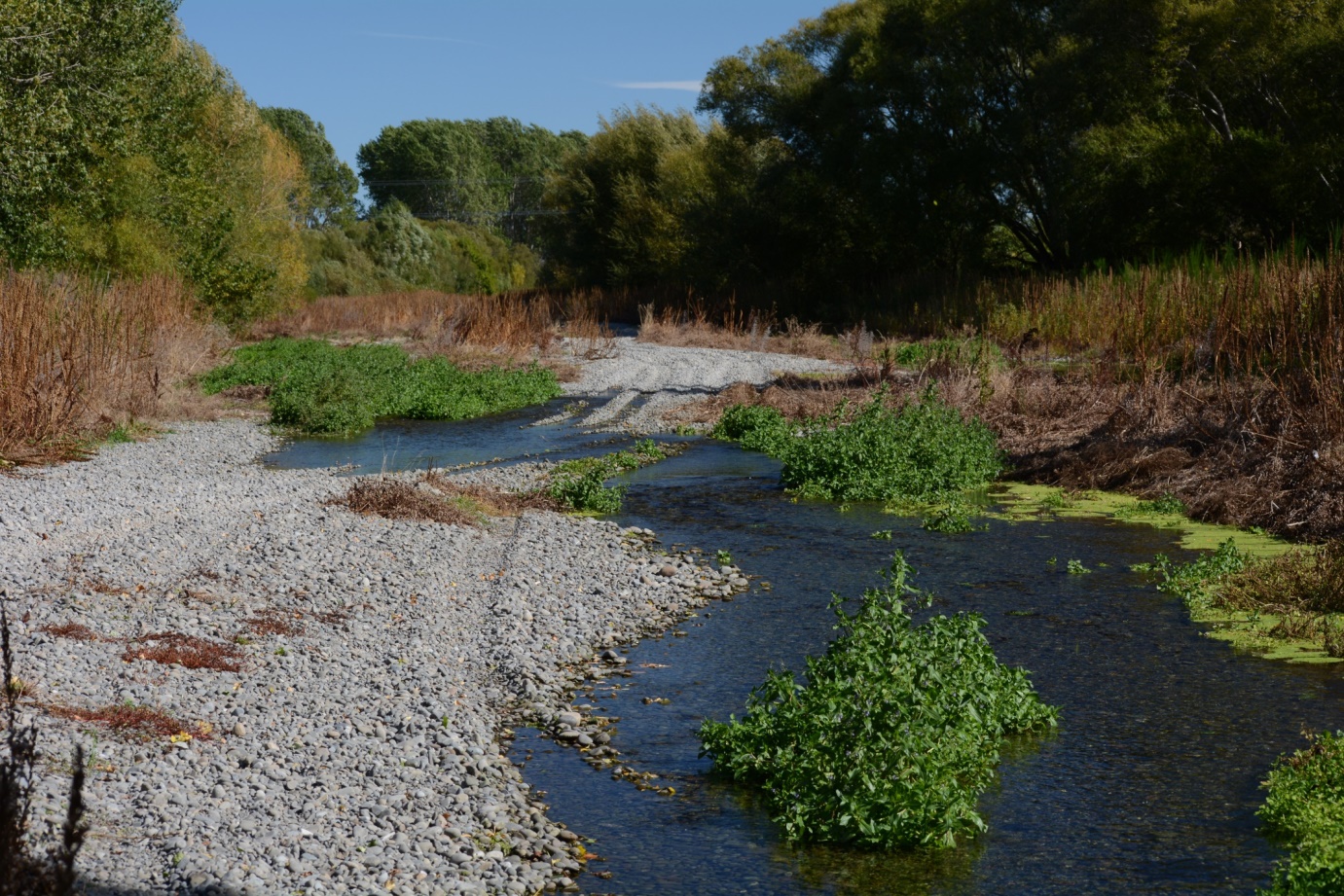 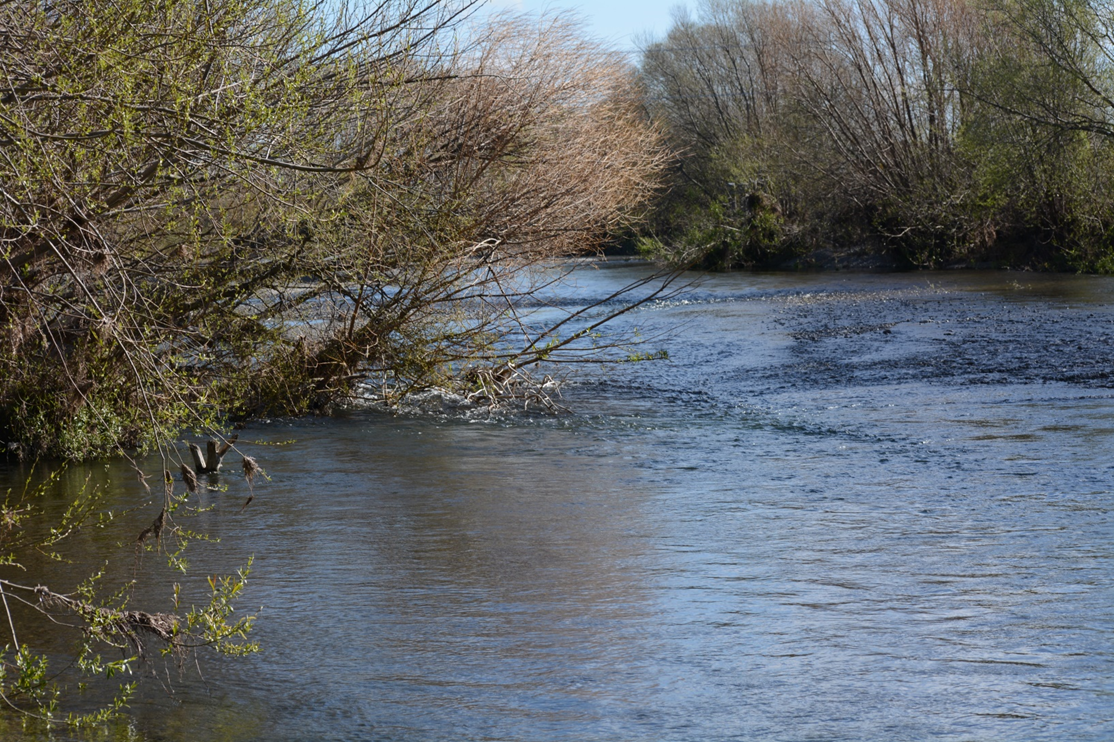 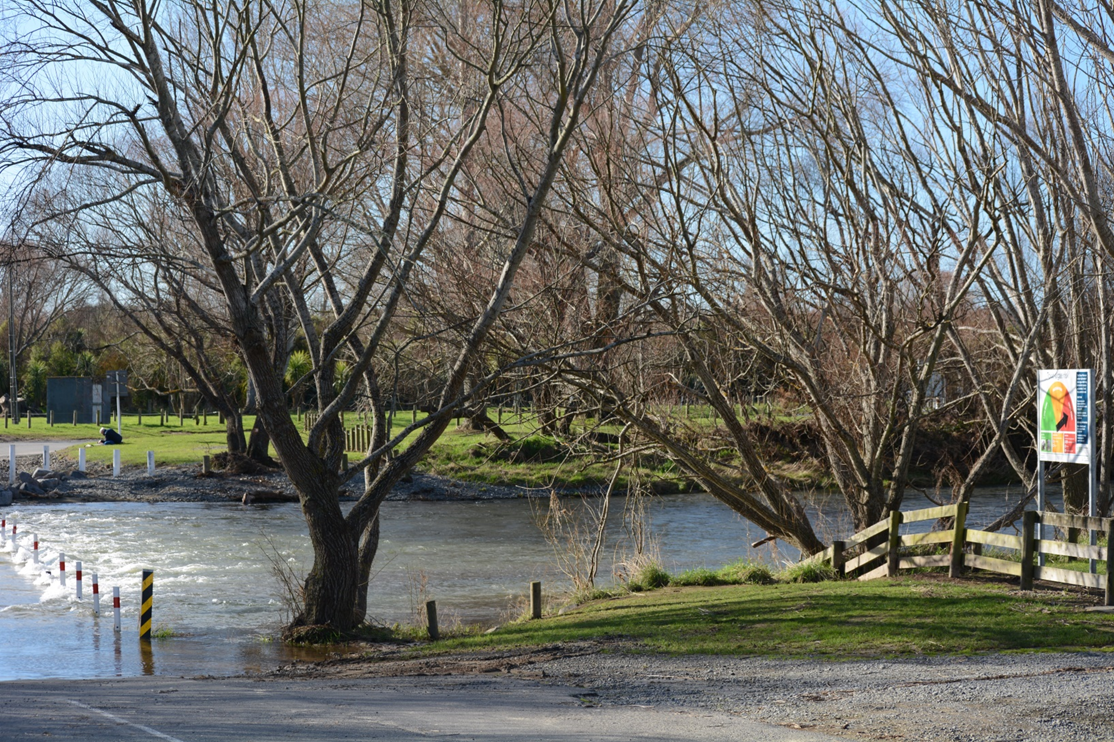 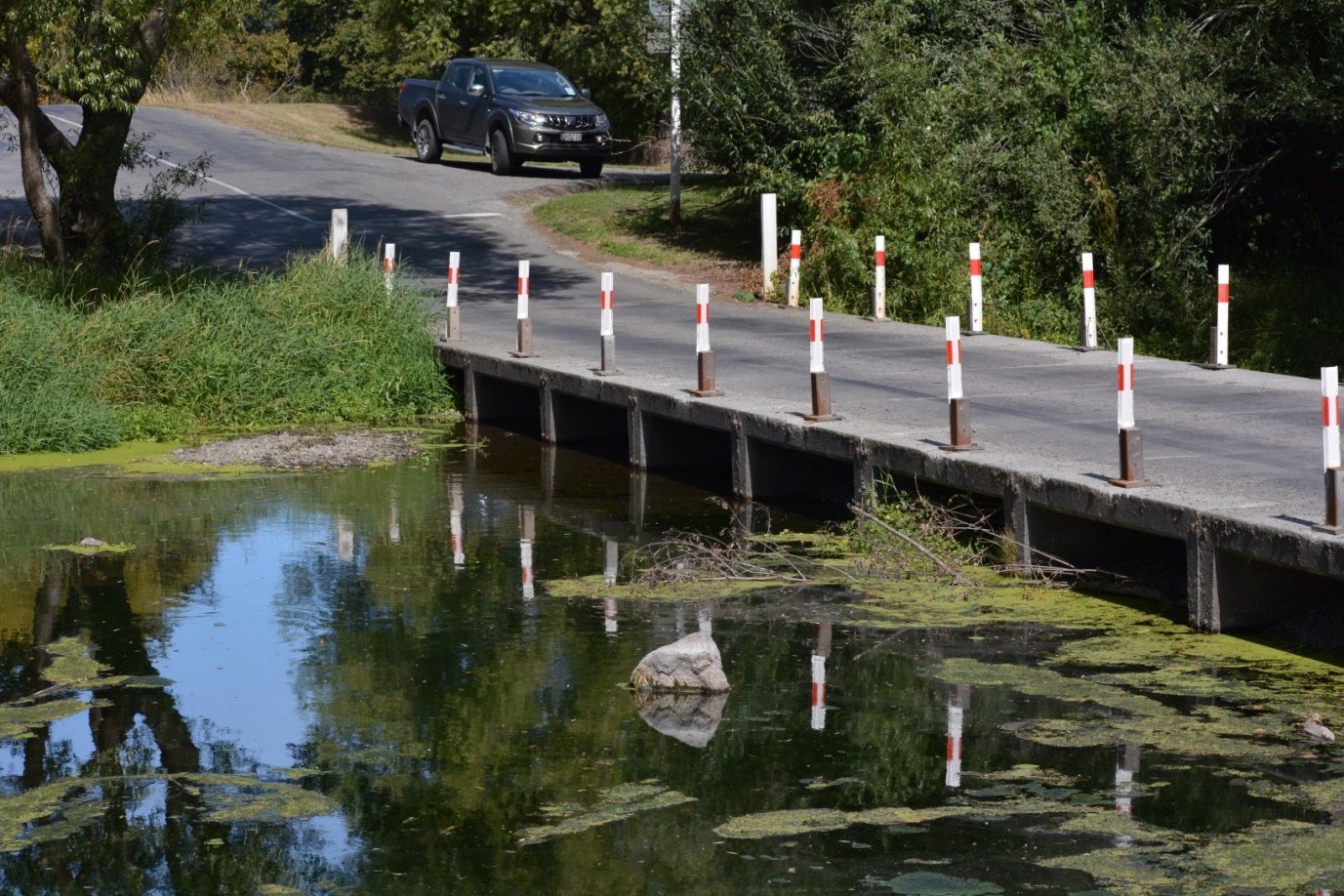 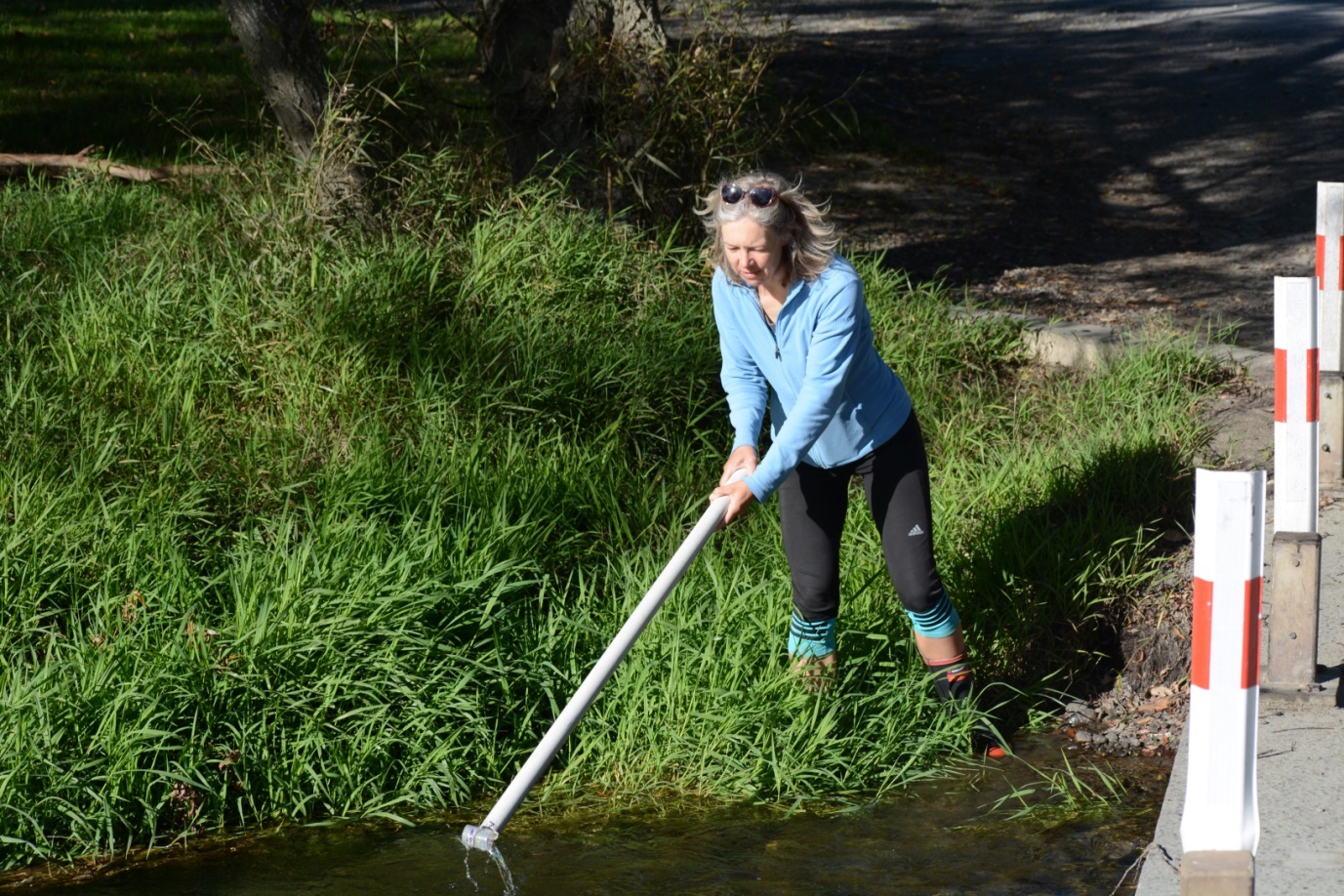 Thankfully there are a number of mainly Christchurch City councillors who recognise something must be done. 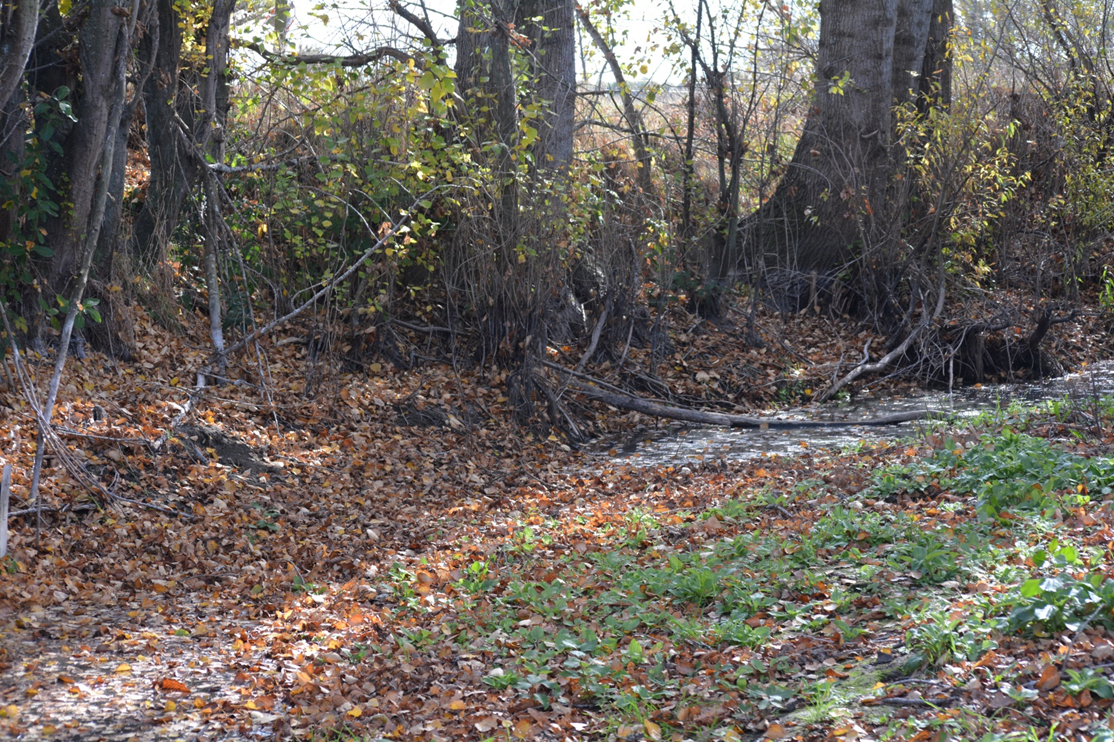 Diffuse nitrate pollution is not just a farm issue 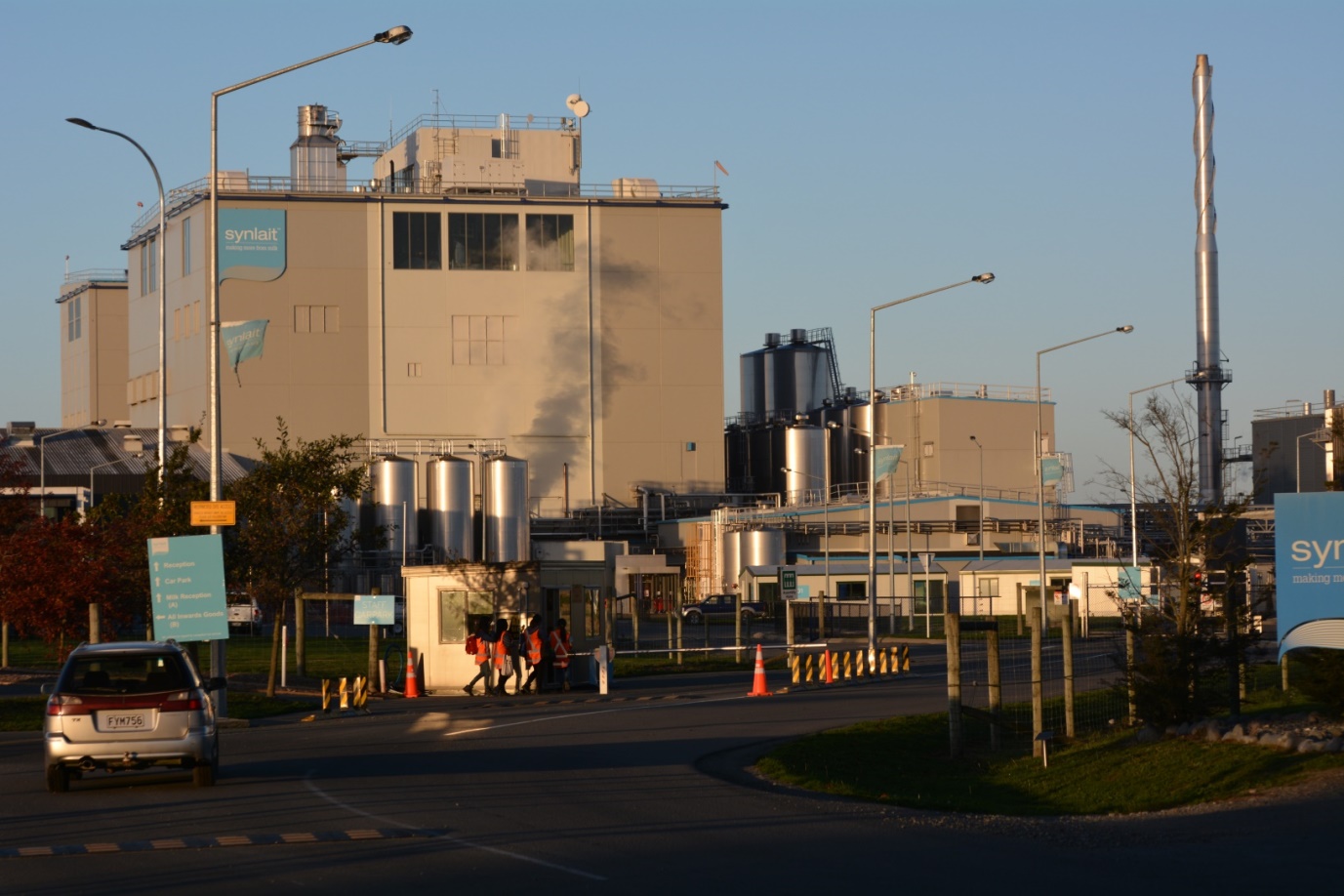 The New Zealand Dairy Research Institute has monitored groundwater at several wastewater irrigation sites in New Zealand. Although the amount of nitrate nitrogen in groundwater under and near dairy factory irrigation sites is highly variable, at many sites the concentration is about or less than the World Health Organization recommendation of 10 g m-3. I.e. 11.3 mg/L NO3-N

This multinational owned feedlot raises questions about animal as well as environmental welfare. 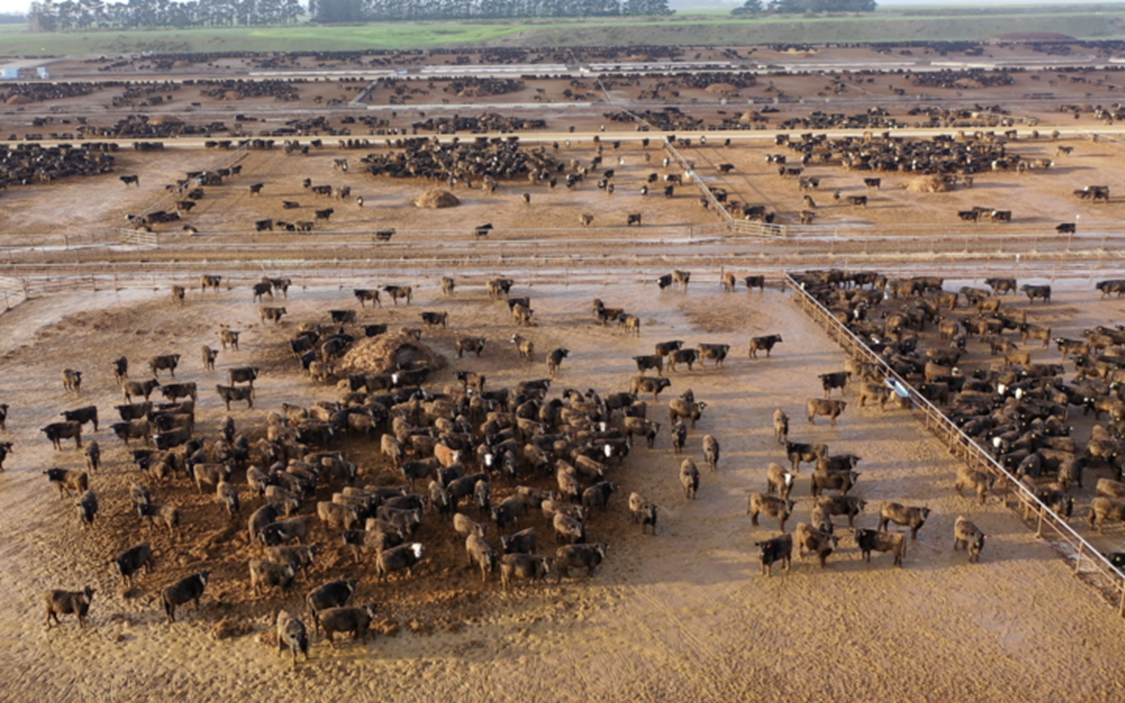 These landlocked processing plants manage their wastewater by applying to land purchased for the purpose.

With nitrate levels in groundwater approaching 16 mg/L NO3-N this would not appear to comply with ANZCO’s (pollution) consents? 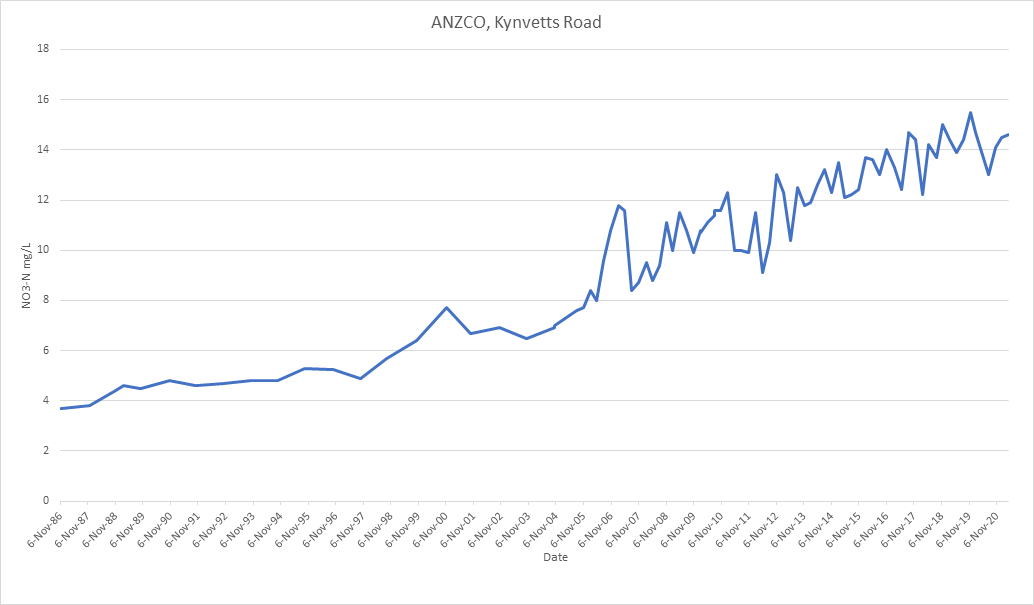 ANZCO has appealed the proposed plan change amendment to Ecan’s Land and Water Regional Plan on the basis of:

Where is Environment Canterbury?

There is a growing awareness that the WHO limit is out of date. 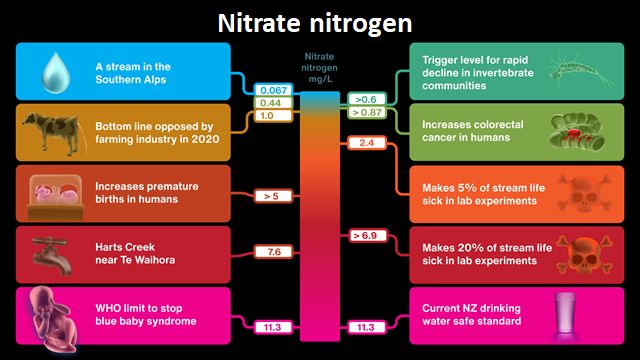 Environment Canterbury is failing to manage their region’s freshwater resource

The CWMS is a drought response plan

It is time for a new approach yet Ecan remains committed to the CWMS and its (amended) Land and Water Regional Plan. An escalating commitment to rules derived from the politics of self-interest in the guise of “community collaboration”.

Compliance with the LWRP is to be achieved within the following 10 years.

Ecan is showing a singular lack of urgency and lack of comprehension in the face of a growing environmental crisis.