You may be too young to remember the little wet flies that were all the vogue in trout fishing prior to the advent of nymph fishing in the 1970s. My early teenage years trout fishing with a fly rod in the early 1950s were based around wet flies such as the Peveril of the Peak, Hardies Favourite, Red Tip Governor and March Brown.

They are patterns that many will not have heard of. And don’t be fooled by the loose terminology of “wet fly.” It’s applied today to Taupo fly lures but in imitating a small fish such as whitebait (Grey Ghost) or cockabully (Mrs Simpson) they are quite different from the traditional English wet fly patterns such March Brown and Hardies Favourite which generally imitate a hatching aquatic insect or nymph. The Taupo type lures should be known as ‘wet fly lures’ to avoid confusion.

Today you will rarely see in tackle shops, a little wet fly of the patterns I’ve recalled.

Yet they are a most effective fly to use particularly in the evenings.

The other evening, on the Wairau River I tied on a little wet fly called Kate McLaren.

I hooked into three browns one after another. Kate has become my “first choice” little wet fly.

I came across the pattern when visiting Scotland some years ago. Ferreting around in fascinating Scottish tackle shops I was told of Kate McLaren.

“I always make sure I have a few Kate McLaren’s in my fly box as I know I can fish confidently if I have a Kate on my cast,” one chap told me. That comment is oft repeated.

“For me this is the classic Scottish wet fly. Not to have a Kate in your box when chasing brownies is criminal. My all time favourite top dropper fly. While deadly for sea trout I think it is at its best for brownies.”

And another glowing testimonial – “An essential brown trout pattern.”

First tied in the 1930s, by William Robertson for John McLaren, and named after his wife, it was brought to fame by their son, Charles, the long term proprietor of a famous Scottish angling retreat. 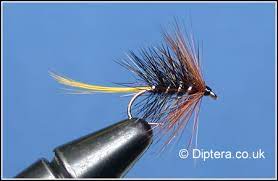 I purchased a couple of Kate McLarens in  Scotland but heaven knows where the originals are now. It doesn’t matter because the pattern is easy to tie. It is;-

I put Kate McLaren to the test and she immediately responded in line with the testimonials.  And the beauty is, even I can tie up a Kate.

But if you feel your flytying is not up to tying a few Kate McLarens then there’s much simpler patterns such as the soft-hackled wet flies that noted author Sylvester Nemes wrote about in his little classic “The Soft Hackled Fly.” His patterns were basically just a silk body and a soft hen hackle. Even in early colonial New Zealand Captain G D Hamilton in “Trout and Other Sport in Maoriland” published in 1904 suggested just five flies with his top choice being a “spider” pattern of, brown partridge hackle, hares ear body (sparse) put together with yellow silk. “Very killing when the water is  clear and low, among high conditioned and shy trout. Used as a tail fly, this is perhaps the most reliable — particularly among large trout—.”

Tie wet flies sparsely. A general failing with shop-bought ones is over-dressing.

Wet fly fishing works best early or late in the summer season but that’s no reason not to fish it mid-season especially just on dark and into the night.

Cast across the current, and for orthodox right handers hold the rod in the right with fore-finger gently trapping the line against the rod. The left hand holds the line. Let the fly swing with the current. Browns are likely to take in the first few metres of the swing.

“Takes” are usually very gentle, almost imperceptible. With practice and experience you will tighten into a fish on more instinct than feeling a take. The take can be so soft it is like a small piece of weed dragging the line. Rainbows may take more strongly.

You need to tighten immediately, holding the line with the left hand and raising the rod.

Bright moonlit nights are unproductive not so much for sea-run browns near the surf but especially for resident river fish. Take care not to slap the fly or line on the water even although it’s near dark or night. Wear waders otherwise the human scent drifts down putting trout off. Move quietly and softly between casts avoiding crunching stones underwater.

Evening rises are often disappointing now, compared to my teenage years when I recall in the 1950s, dozens and indeed scores of trout rising on a long pool in the Manawatu River by Palmerston North. But there will be trout there. So despite no rising fish, try the little wet fly, especially a Kate McLaren.

Fish wee wets “across and down” during the day too especially on riffles. Even fish it upstream instead of the usual nymph pattern, but in nymphing style. Wee wet fly fishing is subtle, successful and yet a forgotten way.