Is Catch and Release As Good As It Feels?

Frank Murphy has fished the upper Motu River situated between Whakatane and Gisborne for just on 40 years.He spent some nine younger years as a professional hunter and operated a live deer capture helicopter base at Motu before reverting to his first love  of catching trout on the dry fly. So he set up a lodge and guiding business. He became the longest serving President of the New Zealand Professional Fishing Guides Association.

But Frank is concerned. He has seen the fishing in the Motu slip back and back. It’s not confined to the Motu either – other trout fishing rivers have shown the same trend. But Frank  reckons he has a major cause of declines pin-pointed.

“This trend, of declining numbers, in my opinion started about the same time as the catch and release approach to the sport,” he explains.

Catch and release slowly became popular, then became not only accepted practice for 90 percent of anglers, but developed a sort of social stigma for those who did not practice it. It had a “feel good” side to it.

“I firmly believe catch and release is responsible for a large percentage of the reason for the decline nation-wide of our trout numbers,” says Frank Murphy.

Frank  considers catch and release interferes with the natural breeding cycle of trout. While the merciful practice does not mostly kill, currently its long term effect may be far more devastating with released fish failing to spawn and thus naturally replenish trout stocks..

“Of course you don’t see trout dead after catch and release, Why? Simply because, if done properly, releasing them after capture, kills very few.” 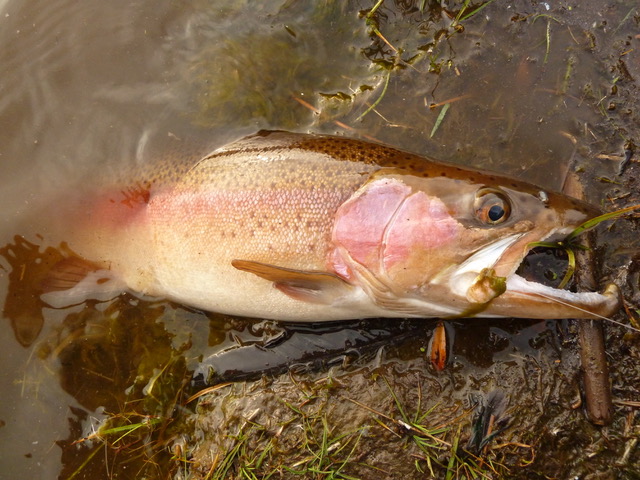 Keep the fish in the water prior to release

But what triggered the realisation by Frank  that catch and release inhibits natural spawning, was noticing a decline in the number of fingerlings that naturally used to occur in the Motu.  Trout were not reproducing.

“One we called Hector we caught 7 times. Catch and Release definitely affected his brain!” laughs Frank.  “Not one dead trout was seen by either myself or my guides dead in the clear water highly visible pools.”

Dairying and the modern style of intensive farming has contributed to a serious decline in both trout habitat and numbers in many rivers, but for Frank it is too simplistic and easy to blame that for the tragic decline of New Zealand’s world-famous  trout fishing.   In the case of some rivers such as the Motu, dairying did not exist.

Recognising the decline Frank set about getting some answers.    On application to the Public Good Science Fund, a $400,000 grant was obtained study the effect of increasing fishing pressure on fragile  headwater fisheries. The research was carried out by Cawthron Insitute.  Trout fishing organisations like the NZ Federation Freshwater Anglers should apply for a similar grant to study the effects of catch and release on future trout populations.

Frank admits to a feeling of guilt.

“ I have a horrible feeling I can’t shake off the feeling I have been responsible by over the years, practising catch and release.

In 1999, Roger Young of the Cawthron Institute in Nelson prepared a paper on catch and release for Fish and Game NZ. One effect was impaired angling quality as trout, particularly browns, adapted to disturbance and rod pressure by forsaking usual edge positions for securer deeper water.

“Some anglers considered that trout occupied traditional feeding spots less often and mainly at times when feeding was most profitable” said an earlier study by Don Jellyman and Eric  Graynoth in 1994. Another study on brown trout behaviour in a remote river in Kahurangi National Park (Nelson) showed trout quickly responded to fishing pressure by hiding more and becoming more difficult to catch.

Catch and release has become increasingly popular. Reflecting that, one 1999 study of backcountry anglers diary returns in  Nelson/Marlborough and Otago, showed that 6830 out of 7408 trout (92 percent) were released after capture. Non-residents (tourists) had higher release rates (98.8%) than resident New Zealand anglers (80%).

But there seemed no in-depth examination of the effects on trout spawning except for Roger Young to note  “overall we should continue to monitor the use and effectiveness of C&R angling and ensure that its benefits outweigh the costs”.

But overseas the impact on spawning on freshwater fish has been seriously looked at. Scientists at the USA’s University of Illinois looked at  the impact of catch and release on large mouth bass and concluded that heightened stress by lifting fish from the water, handling etc., do not result in death, but did have “negative impacts not only on the short term health and condition of the fish, but also most likely on its biological fitness, i.e., its life-time reproductive success.”

Another study in Idaho USA on trout said “the stress to a fish from being caught and released can result in delayed mortality, reduced reproductive success, or increased vulnerability to predation.”

An analysis of blood is the most common tool used to measure fish stress, where cortisol (stress hormone) and glucose and lactate (metabolites) levels are used to measure primary and secondary stress responses.

Another recent study in the USA  by a fisheries biologist was for the for the Wild Steelhead Coalition. It found on  Atlantic salmon there were some very harmful reproductive results from the way many sport-caught fish were handled. Other laboratory and field studies of rainbow trout and Atlantic salmon found that The “natural steroid hormone” called cortisol, was much higher in larger and therefore “longer time fought” rainbow trout than “smaller shorter time” fought trout. Researchers found both Atlantic salmon and rainbow trout decreased their overall reproductive health –(with)– reduced egg weight and size in females, lower sperm counts in males, lower fry survival and smaller weight and size of fry. During early development of fry, smaller yolk sacs and a higher rate of body malformation was evident. 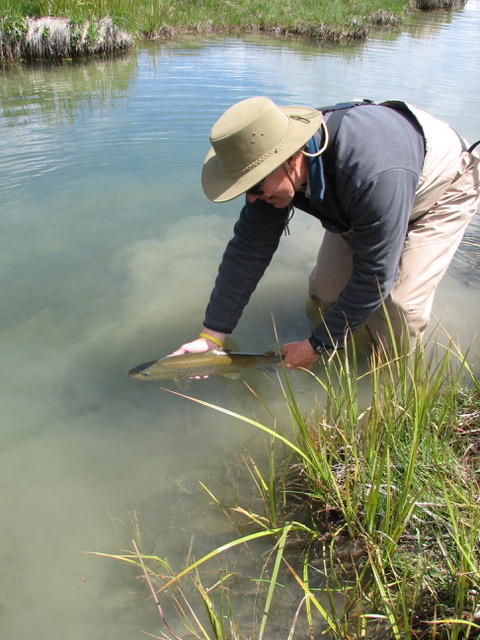 Mortality of fish increased by poor handling. For example in lifting fish from the water, for 30 seconds there was a 38 percent mortality in rainbow trout with a 60 second exposure resulting in mortality as high as 72 percent.

Are those dark almost black, lean out-of-condition trout that seem to be increasingly seen in the shallow water of pools, the victims of catch and release?

The trout angler can minimise any adverse effects  of catch and release. The USA’s  Wild Steelhead Coalition came up with recommendations:-

One part solution is to limit “catch and release”. In a wilderness river with a bag limit of two it seems desirable for anglers to cease fishing once the bag limit was reached – irrespective of whether the two trout were kept or released. In other words, once you’ve caught your two fish that would be the end of the day’s fishing. Making it a regulation would be unenforceable but instilling an ethos by education would have merit. After all, catch and release came down to education and anglers generally developing a philosophy.

It could be time to “smell the roses” and enjoy the river and just watching trout. Or perhaps fishing hook-less dry fly just getting satisfaction out of rising a trout!

US conservationist and fisherman/hunter Aldo Leopold in “The Sand County Almanac” summed it up when he wrote “A peculiar virtue in wildlife (fishing) ethics is that the hunter (angler) ordinarily has no gallery to applaud or disapprove of his conduct. Whatever his act, they are dictated by his own conscience, rather than a mob of onlookers. It is difficult to exaggerate the importance of this fact.”

3 Responses to Is Catch and Release As Good As It Feels?