Posted on 22/11/2022 by Tony
From Epic Flyfishing USA (abridged)
Ok, I’ve led you astray, there aren’t ten, there are three, maybe four. Stick with me here.
Thinking back over the past 20 years or so, I used to haul around just about every fly pattern I could get my hands on. A trip to a fly shop meant grabbing a handful of flies because I felt I should probably have “some of those’ – you know, just in case.  There is a strange and slightly desperate comfort derived from thinking you have all the bases covered – even when you don’t know what the bases are.
The last 15 years have been a remarkable exercise in reductionism for me. Most of the time I really only ever fish 3 or 4 patterns. It just makes a huge amount of sense.
This unequivocal ‘less is more’ approach means not having to frett about what fly to tie on. When you’re only carrying 4 or 5 patterns the choosing part is pretty straightforward, which just leaves you to get on with the fishing part – and that’s the most important bit.
As a rule, trout are usually more concerned about how you present the fly rather than what you present, so, to my mind anyway, it’s more important to become a competent fly caster, reader of water, general observer and well rounded angler.
I’m a better fish catcher now than I ever was, and with far fewer flies – because I’m a better angler.
General impressionistic flies, fished with confidence . Presented well with particular attention given to size rather than pattern. So In a nutshell here’s what you need to nail trout anywhere on the planet:
1 A small brown floaty thing.
2 A small grey or brown sinky thing
3 And a reasonably large green swimmy thing
A dry fly – The small brown floaty thing
Top contenders:
1 Adams: Great general pattern – has a hackle
2 Royal Wulff: Highly visible – But a ridiculous thing to tie
3 Deer Hair Sedge: (No hackle): Buggy as all hell – Floats like a cork – Simple and easy to tie.
WINNER: DHS – Bob Wyatt’s Deer Hair Sedge. I mean – look at that thing. Tied small and slim it’s a mayfly -Big bushy and fat it’s a cicada. This is the Swiss Army Knife of the fly world – but better, it actually cuts.
Editor’s note:-American Bob Wyatt now lives in Otago, NZ. See if you can get hold of his books -(excellent and very practical)
A nymph – The small grey or brown sinky thing
Top contenders:
1 Sawyers Pheasant Tail Nymph: Looks like everything, slim and gets down well – tends to fly to bits after a few fish chomps
2 Hares Ear Nymph: Looks like everything, buggy as hell – holds together well – very easy to tie
That’s it, there are only two
WINNER: Hares Ear Nymph. Fish it wet, dry, slim or fat. It’s everything and nothing and holds up well. 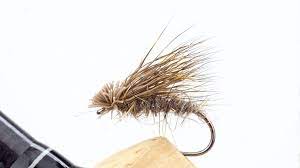 2 Responses to The Best Dry and Nymph Trout Flies?