Be Different – Dare to Speak Out

Posted on 16/11/2020 by Tony
Opinion by James Speedy
Should a government be boss? Should government tell the people what to do?
Or should the elected body do as the voter people want them to do?
If you believe the government should be humble and listen to the public in case of wrath from the people well you are out step with most. When governments get dictatorial and “lay down the law” it is because most people take it lying down. In fact most people are asleep, indifferent to politics. Apathy is commonplace.
You can see it in general elections.It’s plain to see.  In the 2020 election voter turnout for the 2020 General Election was estimated to be 82.5% of the 3.5 million  enrolled. By my arithmetic 630,000 did not vote. They were too apathetic. Far too many.
If one takes a look at Fish and Game elections the same apathy is there. In three of the twelve region council locations in 2018, there was no election because there were nt enough nominations to ensure an election. There should be enough nominations to force elections in every region. By the way, Fish and Game elections are next year.
The strength of any democratic institution is in the voter support.
When voters cannot be bothered, then elected representatives become conceited and arrogant. They forget who voted them in, i.e. the people.
Apathy is a major worry. Consequently the world has in too many cases, become ruled by top-down, dictatorial, often arrogant governments. Sometimes there are exceptions. One exception seems to be France.
Political commentator Chris Trotter put it, “French governments are frightened of the French people. Any perceived threat to their rights—is met by the French people, with action – on the streets.”
In the outdoor recreational scene the 1972 New Zealand election – 43 years ago – was a landmark one for voter power action. The National government wanted to destroy Lake Manapouri in the “people’s national park” to give cheap, heavily discounted power to a corporate foreign consortium Rio Tinto. The people rose up in anger and formed a “Save Manapouri” campaign.
The government then wanted trout farming. Anglers rose up in anger and voted. The 1972 election saw  the National government dumped in favour of Norman Kirk’s Labour one. Kirk significantly loved fishing and hunting and the outdoors. The Kirk government pledged to ban trout farming, not raise Manapouri and the National park’s lake was saved from drowning.
Political commentator Chris Trotter said in his column a few years ago, “it would seem the habit of revolution and the knack of frightening governments, are forgotten at the people’s peril.”
I am therefore reminded of these words:-
Mourn not the dead that in the cool earth lie;
But rather mourn the apathetic throng,
The cowed and the meek;
Who see the worlds’ great anguish and its wrong;
And dare not speak.
Ralph Chaplin (1887-1961) – American writer 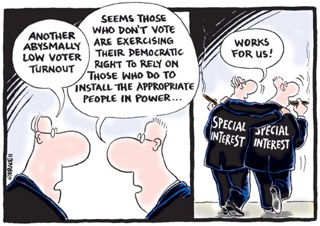 5 Responses to Be Different – Dare to Speak Out