Posted on 12/11/2020 by Tony
Further nitrate testing of water in Canterbury streams and rivers continues to reveal an alarming and deteriorating situation that demands urgent and immediate action says the New Zealand Federation of Freshwater Anglers (NZFFA).
NZFFA carried out nitrate testing a few days ago and nitrate levels in waterways such as Harts Creek, L11 and Halswell, were still consistently high while the Selwyn River showed increases at two sites.
Ecologist and NZFFA secretary Rex Gibson of Christchurch said the situation was totally unacceptable for the public in terms of both aquatic and human health.
“The Selwyn River once a clear, flowing esteemed trout river, has been invaded by weeds and prolific macrophyte growth,” he said.
The major causes were over-takes of water by irrigation and excess nutrients from excessive and intensive dairying which resulted in a grossly polluted source aquifer contaminated by 48,000 ha of irrigated dairy farming upstream of state highway one, made possible by the recently completed Central Plains Water Irrigation Scheme.
Environmental Disaster
“It’s an environmental disaster knowingly created by the previous National Government, ECan and the Selwyn District Council in their single preoccupation to increase GDP, by openly encouraging increased unsustainable dairying,” he said.
Earlier in the year,  NZFFA reported the “not negotiable” pollution to Environment Canterbury which after ignoring the NZFFA’s initial email undertook to give the advocacy a full report after discussion with ECan’s scientific team. A reminder to ECan was made on 28t July 2020.
Clearly five year plans now in effect for three years do not appear to be effective in preventing pollution of the lowland waters of the Selwyn Water Zone, said Rex Gibson.
The NZFFA is actively monitoring the water contamination  because chronic exposure to trout eggs and fry of excessive nitrate have reached lethal levels of toxicity. The local Waihora runanga have been kept informed of these increasing nitrate levels
Indigenous Vanishing
Native aquatic life was also vanishing.
“Freshwater mussels will not survive these levels. Koura seem to have disappeared from these waters while there is a dearth of information about the toxic effects of nitrate on New Zealand native fish and aquatic invertebrates.”
Numerous studies have shown drastic reductions in eel numbers in Lake Ellesmere in recent decades.
On October 7, NZFFA met the 14 ECan Councillors and staff to report the results of the degraded Selwyn River catchment. ECan councillors listened courteously and agreed to provide a written report on their response to the reported pollution of the Selwyn River. As of November 12, no report has been received, said Rex Gibson.
Contact: Rex Gibson <rnjg@xtra.co.nz> or 021 128 0404
<c> Selwyn River – a sad shadow of its former quality. NZ Herald photo 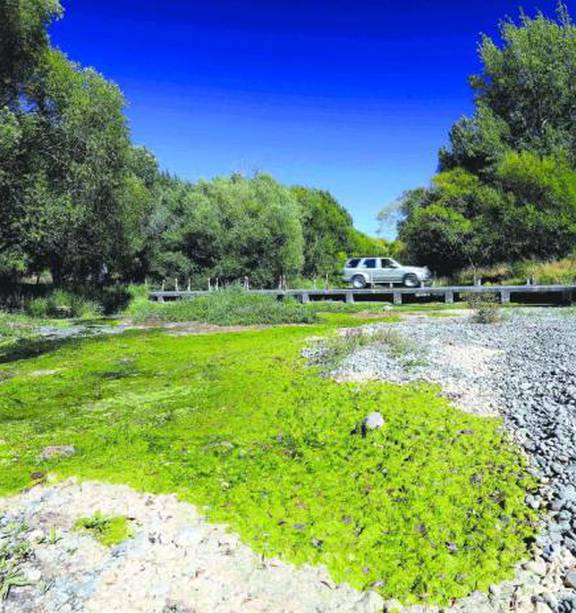