The major South island fishing retail stores all have sections on their websites dedicated to equipment and accessories for fishing the Mackenzie Country hydro canals. The Complete Angler has an extensive set of You Tube videos available on line for all to see. In fact, it sometimes seems that every Tom Dick and Harriet has made a canal fishing video and posted it on You Tube. The quality is, to be polite, very variable; and the language used can be somewhat coarse. 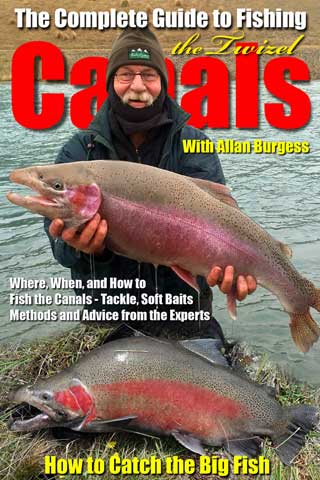 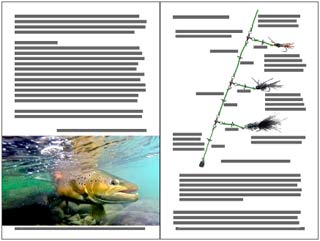 Both beginners and experienced canal anglers can learn from this. It is a compilation of the knowledge of many of the major “experts”. You can find it at fishingmag.co.nz. There is a good summary on the web page. The publication is cheap, methodical and very readable.

The canals will come into their own this year as fishing starved anglers descend on the area when Lockdown Levels allow travel. With the loss of six weeks of regular season even the “river snobs” will find the canal attraction hard to resist. From May ‘til August is widely considered the key time to fish the canals. By September the salmon are “spent” and just “waiting for god”; and the rainbows spawn shortly after.

I don’t intend to give the level of advice that our retail outlet staff can provide, or to compete with Alan Burgess’s publication or Malcolm Bell’s videos. My advice is that of a 2 – 3 times per winter angler.

The first thing to note is the depth of the canals. This is dramatically shown in these photos of the canals when empty. Consider that the average man in each photo is close to two metres tall and estimate just how deep these canals are. 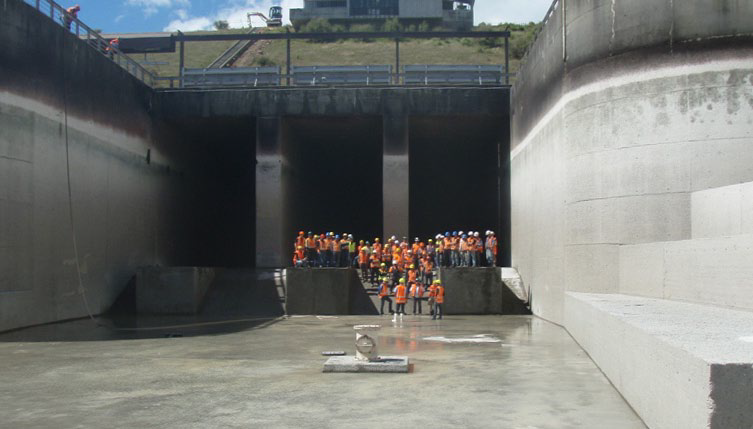 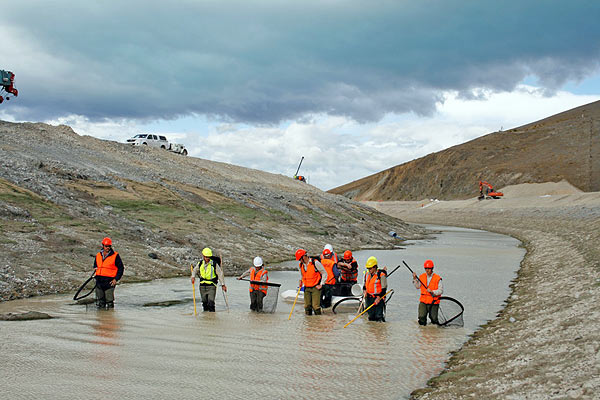 Ten metres would be my conservative guess at the depth. This has quite a lot of significance when you read, or hear, people advising that you need to let your lure sink deep.

The canal fish are the most well fed fish in New Zealand. That is why they grow so large. Like obese humans they do not usually bother to chase their food. Sitting on the bottom they wait for it to arrive, just like people at the fast food dry-through do. Fast retrieves in the top column of water rarely work.

Be prepared for the winter temperatures there. I have fished at mid-day when the temperature was still below zero. The plants were still frozen and the water was warmer than the air. The grassy banks can also be very slippery if icy. 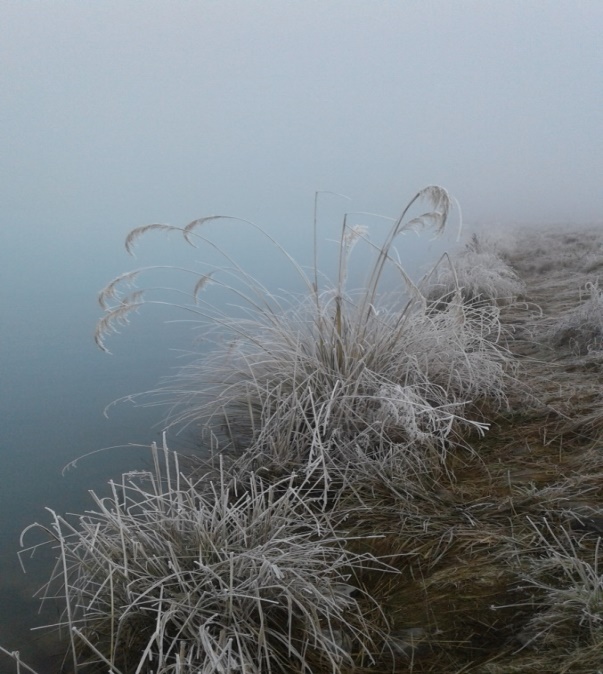 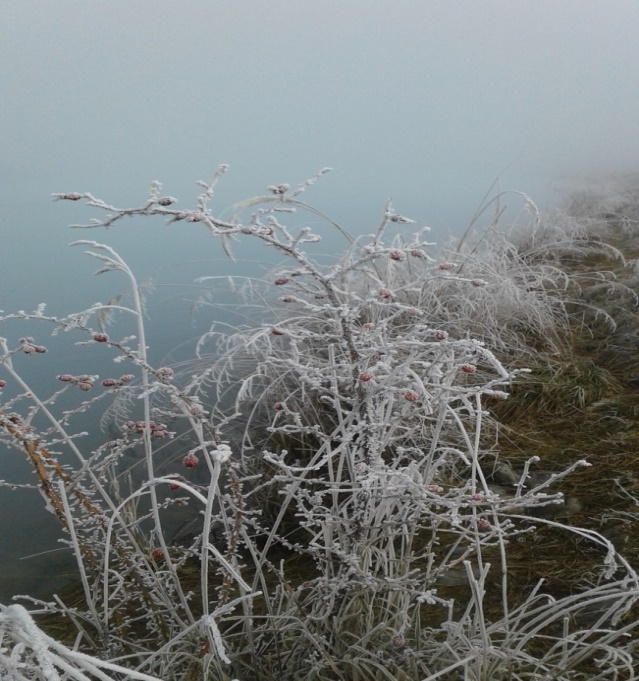 Why do we bother? Well, just look at the fish photos on the retailers’ websites or on You Tube! There are anglers who fish the canals year round. Some are very successful.

A good example is Mike Bate from Kaiapoi. Mike is a well-known advocate for cleaning up our nations waterways. He is also a talented taxidermist and a competent canal fisherman; as this photo of his lounge (on the left) shows: 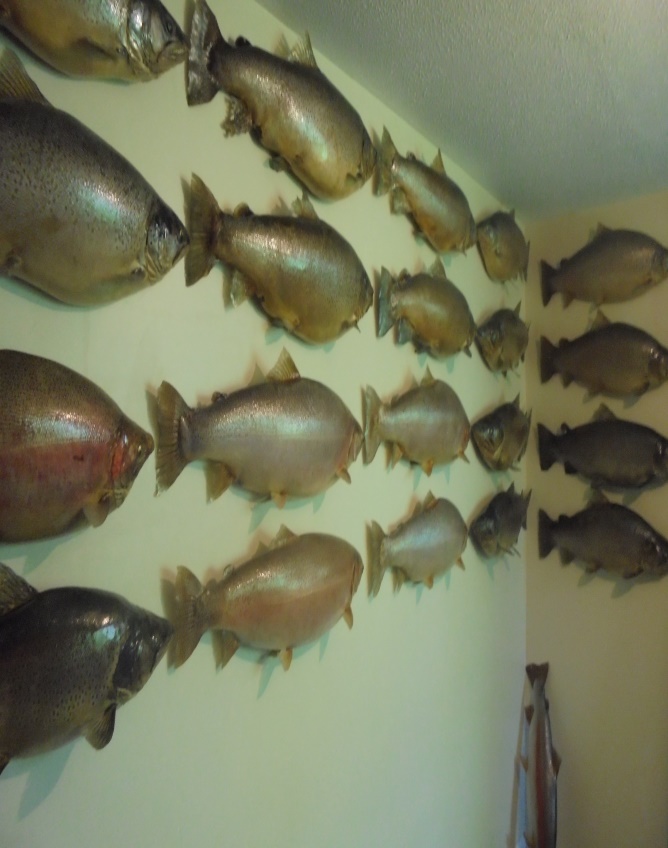 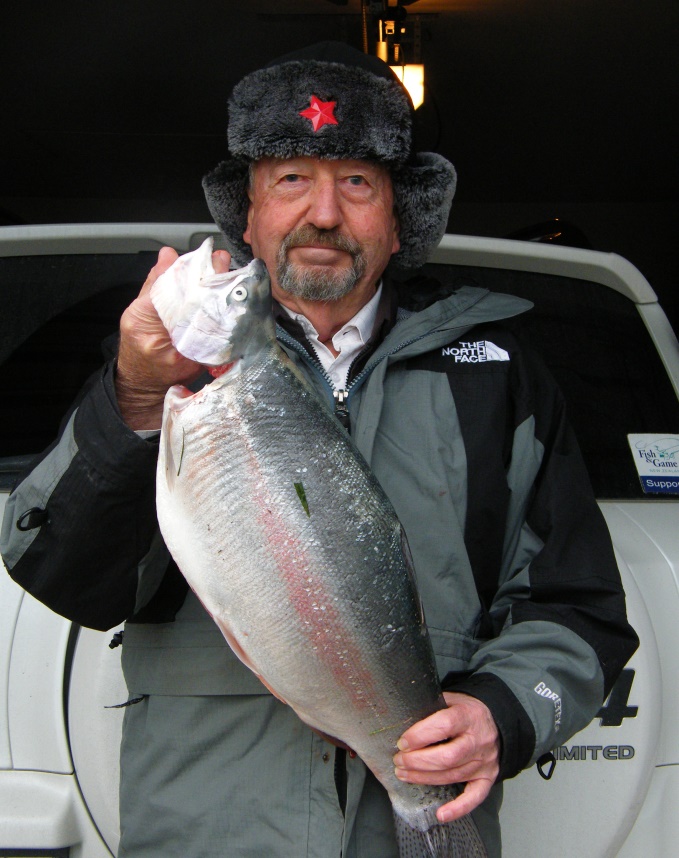 The salmon on the right was caught by me late one afternoon. That day the canal bank had a beauty of its own with the frozen toi-toi and briar bushes glistening whenever a little daylight filtered through the shroud of fog.

I had quickly noticed that every second or third cast was only going out about five metres. My first thought was that my warm, but slightly bulky driving gloves were affecting my casting technique. The answer was however more basic. The line was freezing in the rings. This was taking only a few seconds to happen. Even when I dislodged the little lumps of ice from the rings they stayed clinging to the braid further hindering casting. Dipping the end of the rod in the canal every now and again helped as long as I shook the water off a.s.a.p. Fortunately I discovered that the salmon were not always out at the full distance of my cast.

Although I have, once, landed a doubly figure rainbow, my biggest winter canal salmon to date is eight and a half pounds. The monster 20 – 30+ lb fish are often caught at night. I prefer a glass of vino and a full meal after 7 pm so I leave the nocturnal fish to others.

This entry was posted in Articles. Bookmark the permalink.
WP2Social Auto Publish Powered By : XYZScripts.com