Posted on 07/02/2021 by Tony
A former Fish and Game NZ chairman and currently Central South Island Fish and Game councillor Matthew Hall has sounded a loud warning about the region’s fishery decline.
The report came from Stuff February 6, 2021, written by journalist Mathew Littlewood.
Matthew Hall, a CSI Fish and Game councillor since its creation in 1991 recently told the Central South Island Fish and Game Council  that the region’s trout and salmon resource is a sharp state of decline.
“It would be a fair guess that only five per cent of the coastal sports fishery now exists, compared with 30 years ago,” he said.
The signs were based on trends that within thirty years the salmon and trout fishery would be virtually gone.
Matthew Hall called for action  instead of reviews, audis and “soul searching” paperwork.
“Fish and Game can do as much internal soul-searching and audits as they like, they can have a prized set of standing orders and governance policies— but what they cannot do is control the resource the statute requires them to manage. They must point the finger at others and have them recognise they are killing the sports fish and game resource.”
He recalled his experience during a recent visit to the Rangitata River, where he witnessed “the stench of death” at a site where there is usually a bird colony.
“Hundreds of birds were lined along the water’s edge, none were feeding … there was no food, no smelt run, and this was plain to see.”
“Never have I seen the river to produce insufficient food for their survival. This was both alarming and distressing.”
Stark Contrast
Matthew Hall said the state of the volunteer-run McKinnon’s Creek hatchery, a few kilometres upstream of the Rangitata River, was appalling.
“McKinnon’s Creek today, particularly the lower section is stained brown by aquatic weed growth a stark contrast to the way the creek once was,” he said.
Most lowland rivers and waterways in the Central South Island were “compromised” and “no longer support sustainable fisheries and recreation”.
Environment Canterbury councillor Dr Elizabeth McKenzie, who attended the meeting as a member of the public, said she shared the organisation’s concerns about the decline of the fishery.
“I feel like everyone is measuring, measuring, measuring while everything is dying, dying, dying,” McKenzie said.
“I think we’ve got enough evidence now. We actually do need to do something. We should approach our new Conservation Minister.”
“ECan has only just started on our journey, but I worry it’s going to be too late.” 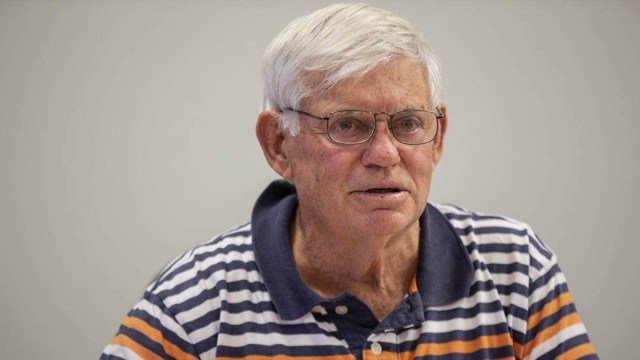 Matthew Hall –  fishery is in a sharp decline
This entry was posted in Articles. Bookmark the permalink.