After 25 March 2020 it appears that all you are likely to catch if you venture out is Covid-19.

It was an interesting season. Fish and Game still struggle to solve the salmon crisis. The National Salmon Committee and both North Canterbury and Central South Island F & G Councils, in particular, need to get all their ducks (sorry salmon) in a row and sell the proposed attempts to remedy the crisis.

Covid-19 could not have come at a worse time really. Those who fish the Waimakariri were just starting to see good numbers. NZ Salmon Anglers report 273 salmon caught from the main road bridge to the mouth, of which 81 were fin clipped, between December and the lockdown on 25 March. A big proportion was caught on the south side of the mouth (where the channel was over this period). Sadly the Rakaia remains a shadow of its former self with regulars all using the word “pathetic” whenever I ask.

I count myself lucky having caught one back in February; a mere 9.25 lbs. The later catches, after 15 March were often 11 – 14 lbs. Despite that it doesn’t rank with past years. Just last year the Waimakariri gifted me a 14.5 lb fish. My 2020 fish however came with a bonus; a hitch hiker, a sea louse. That is a first for me. 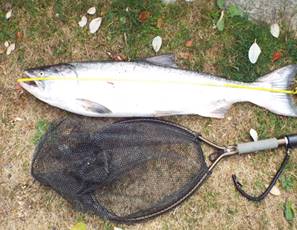 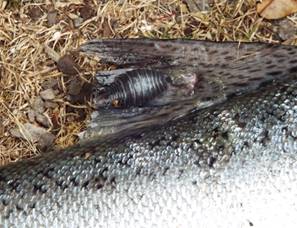 Sadly few of the very successful anglers this year seem to have stuck to the voluntary four salmon limit. There are quite a number with tallies of 6, 8, or even more. These totals were achieved both upriver and in the Kaiapoi River. Perhaps it is time to relook at bait fishing in the Kaiapoi. On 25 March a bait fisherman at the Waimakariri mouth caught a mid-weight salmon while TV3 News staff members were filming “the last day”. As he landed it a licence holder scurried over and asked him if he had a licence, he did not; he was advised that as he did not and also his catch was caught on film he had better put it back. Realising his position he complied. Well done to the licence holder.

A real bonus for anglers this season was the kahawai. They were caught regularly at both Macintoshes and the mouth. They were of a good size this year. I landed two at 7.5 lbs on one day. The first gave us four meals. The second went to an in-law who keeps me in fresh rabbits and lamb. Few fish give you as much of a challenge to land as kahawai. This year they were responsible for two of my reels requiring surgery but that is another story.

Another aspect that was peculiar to this season was the regular appearance of seals, both at the mouth of the Waimakariri and at Macintoshes hole. They were fascinating to watch when they caught a fish, tossed it in the air, caught it again, stripped the flesh from the bones and then turned and smiled at their angler audience. It was like watching a rerun of an episode of the Benny Hill Show to see a seal chase a rapidly retreating angler dragging his fish backward up the beach as fast as his legs would carry him. The flip-flopping motion of a seal in full flight is quite unique. It reminds me of an auntie I had trying to get the last scone from across the room. I suspect that seals will become a regular feature of Canterbury river mouth salmon fishing.

Unlicensed salmon fisherman photographed at the Waimakariri Mouth in 2020. 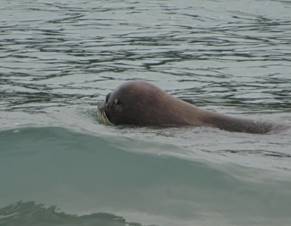 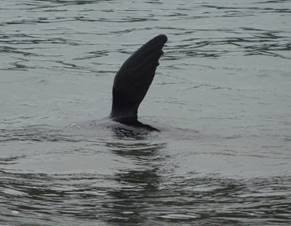 This entry was posted in Home, News. Bookmark the permalink.