The Environmental Disaster of Carbon Farming

Posted on 16/12/2022 by Tony
Opinion by Tony Orman
In April last year, I went trout fishing to a stream that is a tributary of the Wairau River.  It is also an important spawning stream for both brown trout and probably some salmon. It is also a habitat for native fish.
At the road bridge just above its confluence with its parent river, it was a mere trickle. A couple of kilometres upstream it was dry river bed, whereas in previous decades it always had a healthy year-round flow.
The reason was not hard to identify. 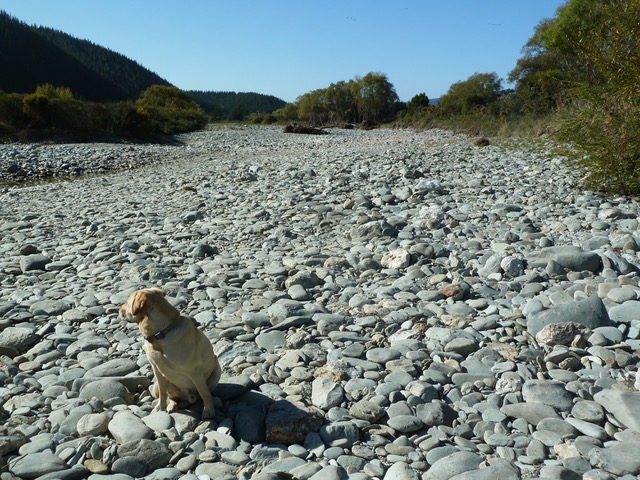 There was once a fine trout fishing and trout spawning stream here
The catchment in the main is covered in maturing pine trees and as the trees grow, sucking more and more water out of the ecosystem.
A study in 2005 showed “about 30% less water flowed from the mature pine plantation than the pasture.” Further information says each day a 12-inch plant will absorb nearly 120 gallons of water. There are also records that the average pine tree can absorb up to 150 gallons of water a day when there is unlimited water.
Global Warming or as it’s now called Climate Change, is a major part of recent governments’ policies.
New Zealand especially so.
In the lead-up to the 2017 election campaign, Labour leader Jacinda Ardern called climate change “my generation’s nuclear free moment”.
An Emissions Trading Scheme (ETS) was the tool devised to combat the perceived global warming.
It was back in September 2008 New Zealand’s ETS was first legislated in the Climate Change Response (Emissions Trading) Amendment Act 2008 by the Fifth Labour Government of New Zealand led by Prime Minister Helen Clark. Labour was defeated at the election in late 2008.
The ETS was then amended in November 2009 and in November 2012 by the Fifth National Government of New Zealand led by Prime Minister John Key.
The ETS under amendments then devolved (degenerated) into a free market trading system where carbon credits could be “wheeled and dealt” – in other words an arena for investing speculators, intent on maximum profits and dividends to share holders.
Environmental considerations like diminishing bio-diversity, wilding pines and depleted river and stream flows are not of concern.
Big business which emit carbon – a factor in climate change – can choose to reduce carbon emissions at source or they can offset those emissions by buying carbon credits.
The latter is their preference. That has led to the method of planting trees in large quantities, to act as a carbon sink.
Pine trees are the obvious answer from a speculator’s viewpoint, as they’re quick growing – compared to native trees – and quickly attain a height of five metres.
Why five metres?
Therein lies the first hint of illogic.
Grossly Flawed
ETS’s basis is grossly flawed as “to qualify as forest land in the ETS, the trees in the forest must be species that can reach at least 5 metres in height.” That’s double the height of a standard ceiling.
Why five metres?
With native vegetation, some 70 species would be excluded from carbon sequestering assessments. Examples are the many species of coprosmas, hoheria, manuka, muehlenbecka, the several species of pittosporums and others.
As such the basis for the ETS is grossly illogically and absurdly flawed.
Despite asking in “letters to the editor” I have not been able to ascertain the reason for the illogical exclusion of vegetation under 5 metres in height.
I did happen to ask a Ministry of Primary Industries person who told me it was “an international ruling.”
What she meant was United Nations.
Even grass must have a carbon sequestering value?
Frequently farmers plant trees out of shelter or environmental or aesthetic motivation. But under 5 metres in height – they don’t count. Under the ETS, farmers are being unfairly lumbered with costly dire consequences. The dice is loaded by the impractical 5 metre height rule.
But even going back to the convenient new title of “climate change” there’s an obvious flaw in its assessment.
Climate change is constant, dynamic and cyclic – for example New Zealand’s once experienced ice ages. In Marlborough, probably some 15,000  years ago, the Wairau River’s upper and middle reaches were a glacier extending down to the Branch River confluence. As climate naturally warmed, the glacier retreated.
Today no glacier exists in the Wairau watershed because of natural climate change and warming from an Ice Age.
The question is how does natural climate change relate to any human induced change?
Conveniently it seems ignored.
Equation to Solve
Therefore the equation to be solved is Natural Climate Change plus or minus Human Induced Climate Change equals the  Actual Climate Change.
To return to “large scale exotic”, i.e. monocultures of pines. Pine monocultures are environmentally disastrous with an insatiable thirst for water depleting streams to dry beds, wilding pines spread, loss of bio-diversity and acidic runoff. 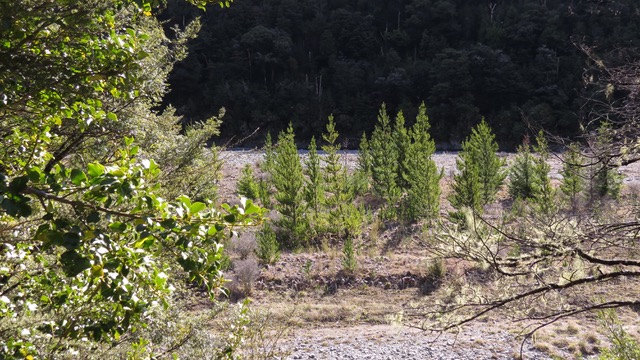 Wilding Pines growing in Marlborough’s Leatham valley on public lands. The Department of Conservation has shown no visible concern
The UK’s Trout and Salmon magazine said “conifers are highly efficient at taking and filtering acidity so that it flows through the soil and water beneath them. Thus acidic loading increases as the trees grow”.
Healthy freshwater ecosystems are usually associated with alkaline (pH) readings. The pH level (degree of acidity) is important to both bottom fauna and subsequently trout. If the pH drops below 5.5 (increased acidity) then long-term damage to the fishery, both native and trout, occurs.
Thirsty Pines
Then there is the insatiable thirst of pines for water. A pine tree is said to use 85 litres of water a day whereas a native tree, dependent on species, uses considerably less. Water from a pine forest with a “bare” pine needle forest floor has quicker runoff compared to a typical native forest area with shade-loving undergrowth. In a few words, native forest has a higher water retention factor leading to natural, more consistent stream flows.
Anecdotal evidence points to streams much reduced in flow once monocultures of pines have been established. For example, bach owners and residents in the Marlborough Sounds and the Northbank of Marlborough’s  Wairau Valley have observed the same diminished flow in creeks after extensive monocultures of pine forests are established.
But planting trees is the way to combat climate change and the free market ideological system of carbon trading is seen as the way of combating global warming.
CAFCA to the Fore
Murray Horton of “Campaign Against Foreign Control of Aotearoa” (CAFCA) in it’s latest “Watchdog” publication, December 2022, writes “The preferred means  (for Big Businesses)—can offset those emissions by buying carbon credits — by planting trees – an awful lot of trees – to act as a carbon sink.”
“In 2018 the Labour-led coalition government introduced a special forestry test allowing overseas buyers to purchase sensitive farm land without having to prove it will benefit New Zealand – a requirement when buying sensitive land for other purposes. By the end of 2021 according to figures supplied by Radio NZ, 212,346 hectares had been sold to foreign buyers,” writes Murray Horton.
Austrian Countess
“An Austrian countess snapped up a sheep station near Masterton for carbon farming of conversion to pines.
Swedish multinational furniture manufacturer IKEA secured a 5,500 hecate sheep and beef farm in the remote Catlins while German insurance giant Munich Re bought large parcels of land near Gisborne and in Southland.”
The fear is that the ETS won’t lead to actual emissions being reduced – that large emitters (polluters) will simply plant more trees to meet their ETS obligations instead of reducing their reliance on fossil fuels.
Consequently some of New Zealand’s biggest emitters – Air NZ,Contact Energy, Genesis Energy and Z Energy- have formed a company called Dryland Carbon which plans too acquire 20,00 hectares to plant in forests over five years. In 2020 it got approval to plant a permanent pine forest of one million trees south of Gisborne.
The Overseas Investment Office has a foreign ownership threshold criteria of 24.9%, but Dryland Carbon’s foreign ownership is well above that with a foreign ownership factor of 35%.
Invariably carbon farming is being practised by foreign corporates.
And with carbon prices high, more and more speculative carbon farming is erasing valuable, productive sheep and beef farm lands.
Foreign Ownership
Radio NZ in 2019 identified that the four largest private landowners in New Zealand are all foreign-owned forestry companies.
“Despite a clampdown on some overseas investment, including a ban on residential sales to offshore buyers, the Labour-led government has actively encouraged further foreign purchases of land for forestry through a streamlined “special forestry test”.
Since the Labour coalition government was formed in 2017, the Overseas Investment Office (OIO) had approved more than $2.3 billion of forestry-related land sales – about 31,000 hectares of it previously in New Zealand hands.
Even further back the foreign ownership of the forestry sector was well underway. In 2010, Keith Woodford, Professor of Farm Management and Agribusiness at Lincoln University, wrote about 72 per cent of pine forests were foreign-owned, with United States companies owning about 35 per cent and Asian companies about 12 per cent. More recent data is incomplete but foreign ownership appears to have further increased, he added.
Figures in February 2022 from the Overseas Investment Office (OIO) show in the last three years 36,000 hectares of farmland has been approved for sale to overseas investors under the special forestry test.
Then there is outdoor recreation. Invariably foreign investors erect locked gates and a refusal of access. That’s understandable since pine forests are potentially highly inflammable.
What is at fault are successive governments and a failure to look after the public interest.
Footnote:
Further information refer to “North and South” magazine June 2022 https:northand south.co.nz/2202/05/14/you-have-now-entered-carbon-country/
Tony Orman is an agricultural journalist and author, trout fisherman and  conservationist.

5 Responses to The Environmental Disaster of Carbon Farming