The Decline of Canterbury’s Stokell’s Smelt

Introduction:- Stokell’s Smelt has been in serious decline for a number of years now. Dr Peter Trolove has degrees in both Veterinary Science and Aquaculture and has been drawn attention to environmental issues around Canterbury’s rivers largely due to diffuse pollution from intensive dairying in the region. Of particular concern is the dramatic decline of the endangered Stokell’s smelt from the Rakaia River and other river lower reaches. These smelt are a key part of ecosystem and the diet of kahawai, trout, salmon and various native birds in the estuarine and immediate sea areas of Canterbury’s rivers. Stokell’s Smelt (STOKELLIA ANISODON) Stokell’s Smelt is the species of the rivers of the Canterbury coastline, where it occurs in huge abundance and is an important food for sea run trout.This species is found on eastern and southern coasts of the South Island and the rivers flowing into that area from about the Wairau (Canterbury) north to the Waitaki in the south.

I believe the marine range of this species may be defined by the low salinity near shore plume that extends about 4 km from the coast extending from the Waitaki river mouth to beyond Pegasus Bay.

Stokell’s smelt spends little of its time in freshwater, being the most marine of the retropinnids. Vast shoals of adults migrate into river mouths, beginning in the spring and continuing day and night. They are extremely abundant in some east coast South Island rivers, where during late spring they may be the dominant fish in the estuaries and lower rivers. They migrate upstream through the river estuaries to spawn where there is little river current over silty bottoms. The fish must fully mature in freshwater. R. M. McDowall (1990)

Stokell’s Smelt is on the International Red List of Endangered Species listed as “regionally restricted, abundant, declining”. In less than a decade Stokell’s Smelt have disappeared from the Ashburton and Rangitata Rivers and is in rapid decline in the Rakaia River. The writer has previously reported his concern to the Department of Conservation that this species of native fish is on the way to being the next native fish to become extinct after the Southern Grayling. 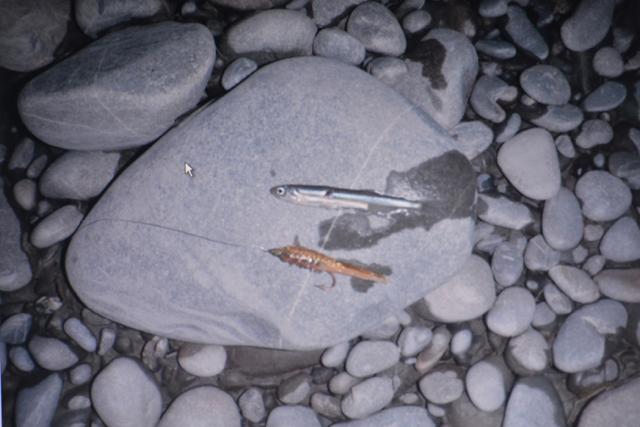 For a wild or farmed fishery, the success of the fishery depends on “feed and seed” – the ability to sustain a healthy breeding population. 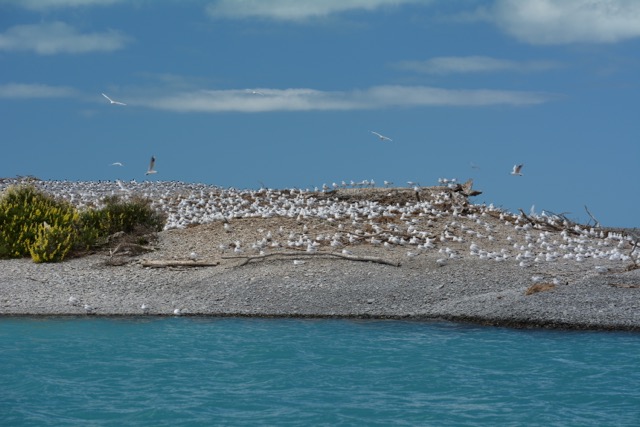 A much reduced mixed colony of breeding gulls and terns. Rakaia boulder bank 2020

It is not by chance that 95% of the Rakaia River fish live within 3 km of the coast. Davies (1983).  The once prolific sea trout fishery of the Rakaia River mouth is in a parlous state. Both the number and condition of these trout show a marked decline. North Canterbury Fish and Game have attempted to boost stocks with 1-2 two year old hatchery trout with very limited success.

Stomach contents of trout taken in the Rakaia river mouth (hapua) zone confirm the disaster that is unfolding. In the 1990s I had an undemanding position as supervising meat veterinarian at a nearby Deer Slaughter Premises. For six years I was on the river from mid-afternoon until early a.m. catching up on my rest “at work”. Once out of interest I counted the smelt spewing from the mouth of a fat 4lb sea trout which together with the stomach contents totalled over 70 adult smelt. The margins of the braids were black with several metre wide bands of these little fish.

I virtually stopped fishing not long after my return to the Rakaia Huts at the end of 2015 due to the small size and poor condition of the trout. Fewer fish with empty stomachs or opportunistic prey such as the odd torrent fish or New Zealand sprat. The salad days were over.

The obvious question is what caused this massive collapse of the native fishery that underpinned the ecology of the whole hapua zone?

In 2011/12 I made a real effort in assembling a detailed submission against the LCP at a Hearing managed by Environment Canterbury to amend the flows proscribed in the Rakaia River NWCO (1988). [During the regime of the “undemocratic, constitutionally repugnant”, Environment Canterbury Temporary Commissioners and Improved Water Management Act 2010. Dr Phillip Joseph, NZ Law Society Journal 2010.]

No one can claim to understand the complexity of Canterbury’s iconic braided rivers, but it seemed a given that if a river that is defined by variable flows should be constrained to steady state flows at less than the 7 year mean monthly low flows then something had to give. Of course Trustpowers’ hired witnesses chorused their “expert opinion” that the effects of the LCP would be “minor or less than minor”. Unfortunately the independent commissioners concurred.

There seem to have been two significant effects on the river ecology and a 3rd due to the out of river use of the Rakaia water that the experts chose to ignore:

Lowered flows led to higher water temperatures which, with at times lack of water, became barriers to fish migration.

Lowered flows meant the Rakaia River was no longer in equilibrium with the headwater erosion causing Ecan’s river engineers to spray the braid bed annually with up to 5x label dose of glyphosate to destabilize the braids in the hope of managing the build-up of gravels in the flood plain. I believe this activity releases the fine sediment that has tipped the lower Rakaia ecology.

Numerous other failures by Ecan due to its irrigation focus of this era are now coming home to roost, not least the nitrate pollution of the Central Canterbury aquifer and the environmental disaster that is occurring in the Selwyn Water Zone’s spring fed creeks and rivers due to a massive rise in nitrate levels.

Many anglers including myself have noted the presence of a thick coating of fine sediment covering the braid beds in the lower river in recent years. We believe this may explain the loss of the smelt. Smothered eggs and the coarse sandy braids they are deposited on.

Ecologist Rex Gibson highlighted this in his article “I have seen Armageddon”. The North Rakaia River once an important spawning and nursery area for the trout thanks to several deep cut holes maintained by upwelling groundwater, became a “dead zone” with cloying mud and algae covering the once open shingle bed. Midges and snails replaced the more vulnerable and productive benthic invertebrates – mayflies etc.

In the past 18 months or so repeated heavy north-west rains have sustained the floods needed to “clean” the braid beds of the main braids of the Rakaia River and a few remnant smelt are hanging in there.

I was delighted this morning to observe a team from North Canterbury Fish and Game, (together with staff from Ecan and NIWA), netting large parts of the Rakaia hapua apparently as part of a comprehensive study to define the situation with regards to the existing smelt population. Unconfirmed feedback suggested few smelt were caught.

A casual conversation with one of the party revealed no smelt were netted in the Rangitata or Ashburton rivers both of which have had their flows massively reduced by abstraction for irrigation.

Put simply Ecan has over-allocated the flows in these rivers to irrigators.

The Rangitata has a worthless piecemeal Water Conservation Order particularly in terms of the salmon fishery, a species that needs the whole catchment for its life cycle.

The bar of the Ashburton River is closed for much of the summer months blocking freshwater access to the species that gave the river its name; Hakatere or “shining waters”, a reference to the once abundant smelt.

So thank you North Canterbury Fish and Game and their local councillor, angler, and guide Bill Southward. Keep up the good work. We await the results with interest. 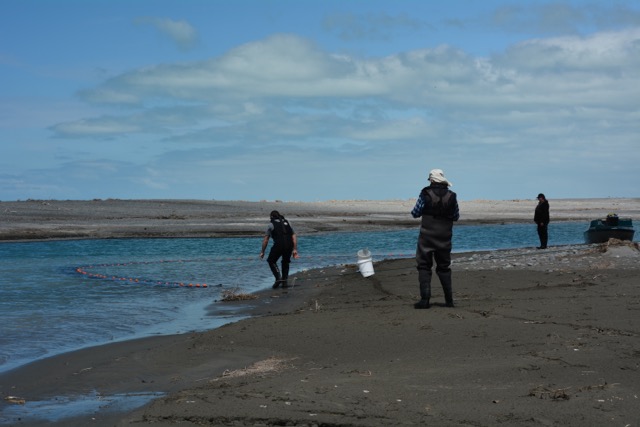 The tidal margins of the hapua springs and lagoon have changed from shingle to muddy rush covered banks. This increase in whitebait spawning habitat may explain the extended runs anglers have observed well into January in recent years.

It seems the fish and birds have switched to this alternate feed source. My angling success certainly improved by switching from smelt to whitebait patterns.

1 Response to The Decline of Canterbury’s Stokell’s Smelt