Posted on 12/02/2021 by Tony
An exclusive Greenpeace investigation revealed that Wairakei Pastoral, a dairy company owned by a handful of millionaire rich-listers, has the right to take more water from the Waikato River than the whole of Auckland.
In the middle of a drought, one agribusiness, with just ten owners, can access more Waikato River water than one and half million Aucklanders sys Dr Russel Norman, Executive Director of Greenpeace.
”Not only is Wairakei Pastoral taking huge amounts of water to do more dirty dairying, it’s then dumping polluted water back into the Waikato river system – upstream of Auckland’s water intake,” he added. “Polluting companies like this are making it harder to get clean drinking water to ordinary people right across the country – all to make a buck.
This week has been full of news about the state of New Zealand’s water.
In Otago, communities are reeling after the shocking news that they’ve been drinking water contaminated with lead.
Fonterra Dumping
And an RNZ exposé uncovered that Fonterra is dumping huge amounts of nitrate pollution from their dairy processing plants onto land – which then makes its way into drinking water supplies.
“Nitrates in drinking water have been linked to increased rates of bowel cancer – a public health expert this week stated that New Zealand’s allowable level of nitrate pollution in drinking water was eleven times too high. New Zealand has one of the highest rates of bowel cancer in the world,’ Said Dr Russel Norman.
Wairakei Pastoral
Nitrate pollution enters waterways largely from cow urine from intensive dairying, along with use of synthetic nitrogen fertiliser. And synthetic nitrogen fertiliser allows agribusiness to have more and more cows.
“It’s grossly unfair that water restrictions mean Aucklanders have to stop their kids playing under the sprinkler, when dairy giant Wairakei Pastoral can take a huge amount of water for industrial dairying and then pollute it for the rest of us,” he said. 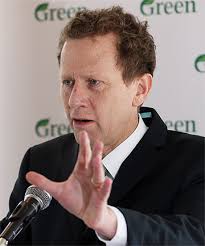 Russel Norman – Wairakei Pastoral, a corporate dairy company owned
by a handful of millionaire rich-listers,  will use more water than Auckland city
This entry was posted in Articles. Bookmark the permalink.