Posted on 18/02/2021 by Tony
News release
The New Zealand Federation of Freshwater Anglers (NZFFA), a national trout and rivers advocacy body, states that trout farming would be of no nett economic benefit to New Zealand and could be disastrous to the country’s tourism-related wild trout sports fishing ‘industry’ that is conservatively estimated to be worth over $1.5 million annually and which employs thousands of people in rural areas.
NZFFA was responding to a report (BusinessDesk Feb 16,) that government was not opposed to commercial trout farming but did not see it as an immediately need. The association’s president Dr Peter Trolove, a veterinarian with first-hand experience of fish farming in Scotland, said the BusinessDesk report contained welcome news quoting unnamed Government ministers as stating it would be “many years” away before legalising trout farming was considered; but it was regrettable that those ministers reportedly believed trout farming was “worth considering”. Trolove noted that the official position of Government now was opposed to trout farming because current legislation prohibited the commercial farming of trout for very good reasons.
“It is interesting to note an NZ Institute of Economic Research [NZIER] study quoted in the BusinessDesk report, stated trout farming could be worth $48 million by 2030. That pales into insignificance compared to the conservative estimate of well over one billion dollars annually earned by present trout sports fishery,” he said.
Detrimental
The contrast was even more pronounced because trout farming would be severely detrimental to the recreational trout fishery, with numerous overseas examples of trout being wiped out in entire river systems by diseases emanating from trout farms.
“The sports fishery is of great value in terms of contributing greatly to domestic tourism and international tourism – generating spending outside of cities into rural heartland regions. There are also the aesthetic and health benefits of outdoor exercise in sports fishing.
“Trout farming, by its damage to the natural wild fishery via various dangers, like imported diseases and poaching (once a monetary price was put on trout flesh), would quickly erode that billion dollar yearly asset. The importation of cheap trout flesh products would be required under the World Trade Organisation’s free market rules if commercial trout farming was allowed and this would quickly make NZ farms unsustainable due to be unable to compete against Asian and other imports on low prices. Commercialisation of trout would also provide a monetary incentive for poaching and black markets as has happened with other wild resources such as venison, paua and crayfish.”
Disease Potential
He said the potential for disease within fish farms was graphically illustrated by losses in King Salmon’s fish farms in the Marlborough Sounds where the company accepted 20% losses as normal and have sustained losses between 40 and 70% on their Marlborough Sounds salmon farms in recent years. Despite two fish pathogens being identified, one indigenous to this country and the other identified for the first time in NZ, both MPI and NZKS passed off this probable disease incursion by assuming the new pathogen has always been present. They blamed the unacceptable level of mortalities on “global warming” despite an independent panel and a Massey PhD student supporting the fish pathogens as the most likely cause of the deaths. The Scottish Government has would find all these mortality levels unacceptable.
Select Committee Short-comings
Trolove was critical of the evidence presented to a recent parliamentary select committee which heard a petition last year from a former Golden Bay salmon farmer calling for the abolition of the current legislative ban on trout farming. The evidence was simply an unformed essay supporting aquaculture in general with little about the benefits or otherwise of farming trout. No budgets or cost-benefit analyses were offered.
The select committee had heard evidence from Fish & Game NZ, Department of Conservation and Ministry of Primary Industries all which had opposed trout farming for various reasons but had been ignored by the committee. In addition NZFFA and the trout fishing public were given no opportunity to make submissions.
“This select committee’s actions were bordering on an undemocratic process,” Trolove said.
The Council of Outdoor Recreation Associations of NZ (CORANZ) also expressed concern at government’s plans to expand the aquaculture sector. 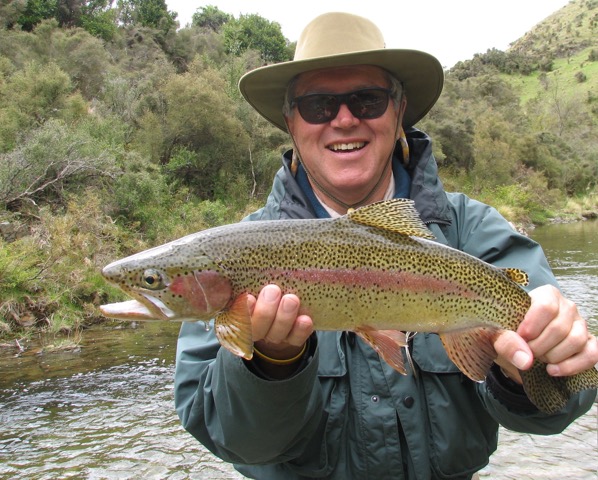 NZ’s trout fishing is world famous and uniquely so because there’s no trout farming.
An American visitor with a Central Otago wild rainbow trout
This entry was posted in Articles, Newsletter. Bookmark the permalink.