The other day I came across an article from the US where the author said that trout brains are small, they’re not very bright and as a result they can eat sticks, leaves and tiny stones. Have a look in a trout’s stomach next time.

It raises the question for discussion about pattern versus presentation. Of course there’s just no hard and fast rules in trout fishing. Just as soon as we reckon we’ve found the complete answer, the trout throw us a curve ball.The experts have long believed the way you fish a fly is far more important than the way it looks.

All trout will from time to time sample things in the drift, trying to determine if what they’ve taken is edible. If they decide it’s not food they spit it out in a fraction of a second. Detecting the take and timing the strike is probably more important than pattern. If you can get a trout to take your fly, you have to set the hook before they drop it. The way I present flies to the trout is what matters most.

The top fishermen I know all have a handful of favoured patterns that they use most times. Many of those patterns are simple, e.g Hare and Copper Nymph. I try to follow their thinking and my own handful of flies is basic. Don’t necessarily believe me. Instead you can read of the “experts”.

Frenchman Charles Ritz (“A Flyfisher’s Life” author) emphasised the way the fly is presented to the trout is the most important thing. So did UK expert Frank Sawyer (originator of the Pheasant tail Nymph) – he fished with just five or so patterns and they were ridiculously simple. Captain Hamilton in NZ fished with just five wet fly soft hackle spider patterns. The flamboyant UK Oliver Kite even caught trout on an almost bare hook.

Settle on just a few patterns. Time with the patterns- and success of course – has given me confidence in my “few patterns”. If they fooled trout, they will do so again.  Sometimes an individual pattern really does matter. But then the trout’s throwing of a “curve ball” means it doesn’t matter most times.

I remember catching trout as a teenager on little wet flies and they got so chewed up by the trout and bedraggled, but still caught trout. Often they were more effective than when new which suggests shop-bought trout flies are often over-dressed. After all trout stream insects are tiny in most cases.

But beware of hard and fast rules. Most days are somewhere in the middle and changing the approach instead of changing the pattern usually gets better results, because a trout will eat anything — well most times if not always. 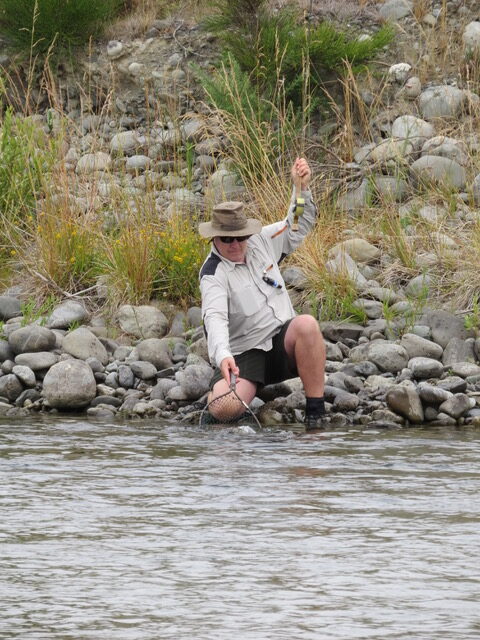 Success on the Wairau River, Marlborough
This entry was posted in Articles. Bookmark the permalink.