Posted on 11/10/2021 by Tony
Special Report
A recently retired Central South Island Fish and Game councillor Matthew Hall has warned of the cunning and deepenng crisis with the public’s waterways. His retirement had an underlying feeling of disappointment that Fish and Game had become bogged down in “administrative processes’’.
Fish and Game had an audit that wasn’t effective to any great degree and currently they are immersed in a Ministerial Review of the organisation.  The “administrative stuff” was not helping the core purpose of restoring trout rivers and game birds.
“The Water Conservation Order in the Rangitata River was a major achievement, but it’s been a holding action against huge opposition. Fish and Game were seen as adversarial to what the Governments of the time were trying to achieve,” he told “Stuff. “It’s becoming more and more apparent that we need clean water. I’ve got a hut in the Rangitata, and we haven’t been able to drink the water there because of nitrates. That is just the start.
A major challenge is declining fisheries. Many lowland rivers are hugely compromised.
“You’re not going to sell many licences for fishing those rivers. It’s really the canal fisheries that are really holding up the licence income,” he said. “The sea-run salmon fishery is no longer the great income generator.”
Poor Law
The issue with Fish and Game is that legislation is deficient. Fish and Game’  task is to manage and maintain the resource, but they cannot control it. The deficiencies in law were not rectified by the Ministerial review.
“All the review did was shift a few table mats on the table,” he dryly said.
Restoring and enhancing sports fish in rivers is only going to happen through getting control of the resource, and making sure there’s adequate water in the rivers and ensuring the quality of the rivers.
Mathew Hall expressed concerned at the outbreaks of cyanobacteria and algal blooms in many of the region’s rivers over the summer.
The rivers belong to the people.
“I’m really worried my grandchildren won’t be able to swim and fish in them,” he said.
Act Needs
CSI Fish and Game chairman Dr Andrew Simpson said the  the council has been obliged to respond in this term to both a governance audit and a Ministerial Review “which have each been time-consuming”.
“The Conservation Act is showing its age,” Andrew Simpson said.
Fish and Game Councils are required to ‘manage, maintain and enhance’ sports fish and game resources, but can only have the power to recommend to the Minister season bags, season dates and fishing or hunting methods.
“Those powers might have been fine when salmon were abundant, but they don’t enable the council to ‘maintain and enhance’ a fishery that is in crisis,” he said. 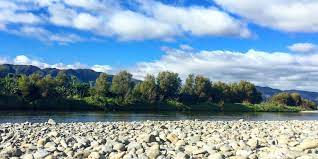 Hutt River near Wellington officials have told public to stay out
of river after water contamination.
This entry was posted in Articles. Bookmark the permalink.