No sport in the world can perplex its votaries so much as angling. There is always something to learn, always some apparent contradiction arising – always the doubt whether something else having been done, the catch would have been better.

The experienced angler is aware of this and never a promise will he make to bring home a fish. But fools that we are and wise creatures that trout are – we are sometimes led astray and that brings us to the crux of this article.

For seven consecutive weekends, the rain has fallen and the winds have blown and rivers have risen and never a chance have Wellington anglers had to get a good day in, but Saturday November 25, 1935, dawned fair and warm and gradually improved until by 10 am it was a God-given spring day with the countryside ablaze with broom, gorse and dog roses and the hedges of English May gave out their best scent.

What chance had the willing fish got?

Not a dog’s chance – not a trout’s chance!

All the unfulfilled promises of fish of the last seven dreary weeks – since trout season opening October 1 – passed through any mind as I flicked over the first pool. Three marvellous runs were fished with extra care – never a rise, never a sight of a fin.

Strange yet there must be a reason.

So up we go to another perfect pool and here my heart was gladdened by the sight of at least six trout ranging from two to three pounds. They were strangely still, none of that gentle weaving to and fro. Still they were fish in a good lie.

A dozen perfect casts were made, several changes of fly. All to no avail.

By the time that pool was fished out, I had seen no less than twenty good fish in feeding lies and none of them even acknowledged the fly by a movement and seemed strangely indifferent to my presence when I walked up.

So it went on pool after pool, run and ripple until at last a lightly dropped hackle fly in the side off a fast rip brought up a big snout, shoulders and back and with a feeling of thankfulness, the line was gently tightened.

All day long was one bitter disappointment after another.

Later in the day big fish up to three pounds, were seen to drop downstream a yard or more and just a few inches under the floating fly and then roll over and give it a flick with their tails. Not one ever attempted to rise to it on food intent.

Meanwhile all Nature continued to make it – weather wise – the day of days to be on the river.

But the nett result of that perfect day – in terms of trout – was just exactly nil.

What was the reason?

We are far too old and experienced anglers to be ever accused of just not doing something right. What we did was right but it did not bring fish.

So I say trout fishing is an enigma and that is why we angle and the only cure for it is old age or death.

I am going back to those Wainui-o-mata pools and some time or another hope to connect with some of those “lunkers”.

I’ll keep going there till I do, but I wish I knew why the trout refused all invitations on November 23.

Perhaps they wished to hear the result of the general election – in a few days time on November 27 – before they take a chance?

The 1935 New Zealand general election on November 27, resulted in a crushing win for the new Labour Party. Michael Joseph Savage became prime minister after defeating the governing coalition comprising the United party and Reform Party in a landslide.

The governing coalition lost 31 seats, which was attributed by many to their handling of the Great Depression. The year after the election, the United and Reform parties merged to form the National Party.

The election was originally scheduled to be held in 1934, in keeping with the country’s three-year election cycle, but the governing coalition postponed the election by one year hoping that economic conditions would improve by 1935.

“The Dominion” a Wellington newspaper, printed anti-Labour advertisements and editorials. On Sunday 24 November, shortly before the election, an address by Colin Scrimgeour popularly known as “Uncle Scrim” on the Friendly Road radio station, which was expected to urge listeners to vote Labour, was jammed by the coalition government’s Post Office! 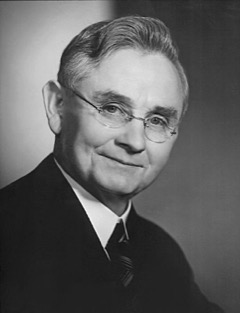 Michael Joseph Savage – were the trout too preoccupied

with the election to be bothered feeding?