Streams Drying Up Under Onslaught of Pine Trees

Late last year, research commissioned by Federated Farmers and Beef + Lamb New Zealand (B+LNZ), found 54 percent of New Zealanders want carbon farming, i.e planting pine trees where fossil fuel emissions can be offset with new pine forests, to be strongly limited. Relating to this was that over 65 per cent of people oppose foreign companies buying New Zealand farms to offset their emissions by planting monocultures of pines. Under the lax foreign investment rules, foreign speculators get approval with ease.

Other statistics from research late 2022 shows more than 52,000ha of land was purchased by forestry interests in 2021 – a 36 percent increase on the previous two years and up from 7,000ha in 2017. Since then, more land has been purchased by foreign speculators.

While government has done nothing to address public concerns, the purpose of carbon farming, i.e. converting productive sheep and beef farms to pines, has already been achieved. Beef + Lamb (B+LNZ) says this is far more than the 25,000ha a year of exotics that the Climate Change Commission has suggested are needed to achieve New Zealand’s climate change objectives.

B+LNZ is forecasting significant economic damage to New Zealand’s red meat sector, rural communities and the economy as a result of the conversion of productive land into carbon farms. “However, the scale of change is far in excess of what is needed, and the Climate Change Commission agrees with us on this. This will have significant long-term implications for rural communities and the wider New Zealand economy.”

New Zealand is currently the only country in the world to allow 100 percent offsetting of fossil fuel emissions within the ETS. The European Union only allows 10 percent and California (US) eight percent.

This relates to rivers and streams. How much water does a pine tree drink a day? The basic rule for drinking pine is 10 gallons of water for every single inch of tree diameter. That means a 12-inch plant will absorb nearly 120 gallons of water. There are also records that average pine trees can absorb up to 150 gallons of water a day when there is unlimited water.

Where pines have been planted in watersheds, streams often run dry whereas before pines, there was year round flow.  The NZ Federation of Freshwater Anglers warned – five years ago – that the issue of encouraging and allowing monocultures of pines needed to stop. At the time the Labour-led coalition government had embarked on its “billion trees” programme. NZFFA called for caution and foresight in the new government’s ambitious “one million trees” policy so as to avoid monocultures of pines.

NZFFA said monocultures of pine trees in many parts of New Zealand had been an environmental disaster with depleted stream flows and heavy deposition off logs, slash and silt into rivers, coastlines and estuaries following clear felling logging.

The Federation said the emphasis should be strongly on native trees, and not pines. 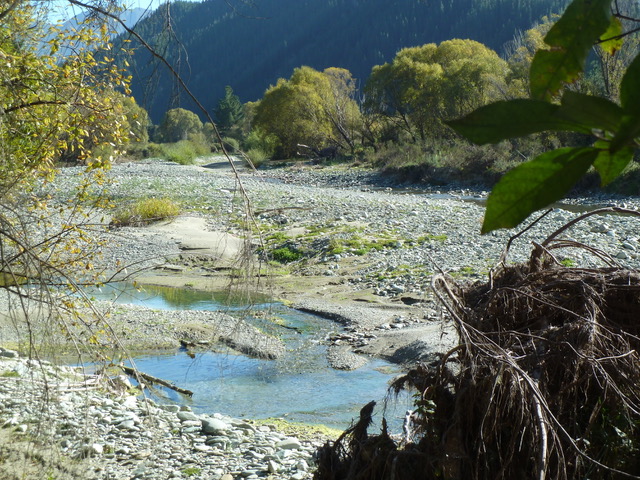 This stream flowed all year round with a consistent flow to make it a valuable spawning stream and a quality fishing water.

increasingly take water. The basic rule for drinking pine is 10 gallons of water for every single inch of tree diameter. That

means a 12-inch plant will absorb nearly 120 gallons of water. There are also records that average pine trees can absorb

up to 150 gallons of water a day when there is unlimited water.

8 Responses to Streams Drying Up Under Onslaught of Pine Trees