Dead rats found on beaches near the mouth of the Buller River near Westport were almost certainly 1080 killed rodents, despite Department of Conservation denials.

NZFFA president Dr Peter Trolove, a retired veterinarian, said the rats most likely came from a 1080 drop in the Maruia valley, a tributary of the Buller. During November 2 and 3, 2019 the Department of Conservation aerially sowed approximately 140 tons of 1080 baits over nearly 70,000 ha of the upper Maruia and Grey catchments.

On 9 and10 November, after a heavy rainfall, over 700 dead rats, a weka, a goat, and a number of black petrels and bottom feeding marine fish washed up on a Westport beach 140 km from the start of the Maruia valley operation.  Because of 1080’s secondary poisoning characteristic, every carcasses remained toxic, a danger to wildlife, people and their dogs.

“The operation covered the section of the Maruia River from the Lewis Pass to below the Maruia settlement. The Maruia River joins the Buller River below Murchison which in turn flows into the sea at Westport,’ said Dr Trolove.

However on 20 November DOC issued a press release stating that toxicology on 8 dead rats and a weka had shown no presence of 1080.  Because of long delays  in testing, two rats were too decomposed to test. The veterinarian school at Massey reported cause of death unknown after the post-mortem examination of five of the rats and the weka.

Soon after DOC West Coast Operations Director, Mark Davies said the results confirmed that rats washed up on the beach were unlikely to have come from an area where 1080 has been used.

The Federation had long made searching scrutiny of 1080 relative to rivers and trout said Dr Trolove. Fishing groups expressed concerns that mice – which were often eaten by trout – could carry sub-lethal amounts of 1080, posing a food safety risk as well as leaving poison residues in trout thereby undermining fish health and reproduction.

Dr Trolove questioned the credibility of DOC’s denial that 1080 was involved in the rats death.

He listed a number of issues that called Doc’s press release into question:-

•The timing of these events

•DOC’s failure to test for flurocitrate, the toxic metabolite left in the muscle of poisoned animals. Ian Shaw, a toxicologist, criticized DOC for only testing for Sodium fluoroacetate).

•Photographs in local newspapers and on Facebook show images of decomposing rats, largely devoid of hair, with bloated or water logged carcasses. Such carcasses would have been totally unsuitable for post-mortem examination

•DOC and MPI have a bit of an each way bet on the persistence of 1080 in tissues – apparently sheep are safe to eat 10 days after subclinical exposure and trout are safe to eat 7 days after an aerial application. Some state sponsored papers record 1080 persisting in carcasses and dumps for months. Others find it is rapidly broken down in water by microbial action. “I doubt there has been any controlled studies attempted on tumbled decomposing water logged rat carcasses.”

•The flight paths of the helicopters passed over the many side streams running down into the Maruia River valley. How much of the 140 tons of the 1080 pellets washed down to the sea?

“With the likelihood that DOC has inadvertently poisoned the entire catchment of one of the South Islands longer river systems, DOC’s underwhelming response and fanciful explanations are simply not good enough,” said Dr Trolove.

Belinda Cridge, from University of Otago’s Department of Pharmacology and Toxicology, said she had read both reports. She had several questions around the processes used in the trust’s testing and questioned its final results.

“Performing the test for 1080, and in particular fluorocitrate, is complicated and requires a very high degree of technical expertise.

Flora and Fauna of Aotearoa and Clean Green New Zealand Trust said it had some of the wildlife tested at an unnamed laboratory, which found the rodents had been poisoned by 1080.

© Dead rats on the Westport beaches back in November 2019. 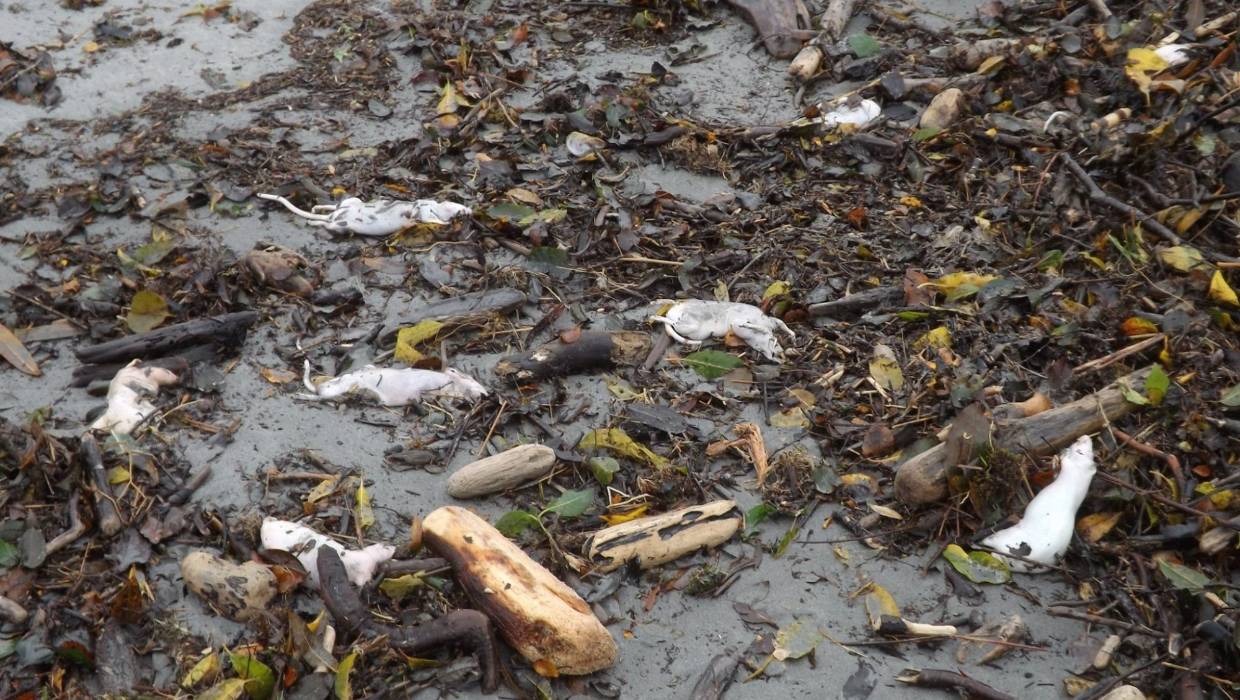 This entry was posted in Press. Bookmark the permalink.
WP2Social Auto Publish Powered By : XYZScripts.com