It is not yet Christmas yet already toxic algae has appeared in North Canterbury Rivers such as the Waiau. The Canterbury District Health Board has issued a health warning.
It is not the first water  warning this summer.
In late November, a toxic algae warning was issued for Canterbury’s Pegasus Lake.
It is not the first time this year either. In the case of Pegasus Lake it is the sixth year.
The algae in more recent Waiau River case is “a moderate to high amount of benthic cyanobacteria”.
The District Health Board (DHB) has warned people to avoid the area, and animals, The particularly dogs, should not be allowed near the water until the health warning was lifted.
The DHB said the algae could be present at other places along the Waiau River and advised “people should treat every low-flowing river with caution”.
There are also health warnings in place for Lake Ellesmere, Opihi River at Saleyards Bridge, Selwyn River near Glentunnel and Whitecliffs Domain, Waihao River at Bradshaws Bridge, Hakataramea River at State Highway 82, Waimakariri River at Thompsons Road, Hurunui River at SH1, and Pareora River at SH1 due to algae.
Every River
How did New Zealand’s waterways and lakes get to this situation? What dire stage is the water quality crisis at when the DHB warns “people should treat every low-flowing river with caution”.
What is being done to attack the dreadful situation where the public are advised to regard every low-flowing river as contaminated with a toxic algae?
Successive governments have been “fiddling while Rome burns.” It goes back probably to the last century but if one must indulge in a post mortem, the National government 2008-17 was to the fore in terms of guilt.
Back in March 2010 – a decade ago – National’s Environment Minister Nick Smith sacked the elected board of councillors at Environment Canterbury. A report at the time said “the decision has been heralded as a black day for democracy, but Smith says the performance of the councillors was so bad they couldn’t wait until the elections in October.”
Communism?
All Smith had to do was to wait seven months till the next election. But he and government could not wait. They wanted control.
The state takeover followed a report by former National MP Wyatt Creech who described the council as “dysfunctional”. A former National MP? And no greater shakes ether during an undistinguished political career.
But the sacked councillors said the takeover was bad for democracy.
And it was.
It was bizarre in the extreme that Smith as Environment Minister should be a central figure. Environment minster? Yeah right!
It was a state takeover more typical of a communist regime.
The National Government rushed through legislation which suspended that year’s elections for ECan and giving the commissioners wide-reaching powers to achieve their purpose.
Legislation removed the Environment Court as an appeal option for people opposing consent decisions and restricting general legal avenues. Power to make final decisions on water issues rested with Smith.
It was an affront to democracy.
Enter Sam Mahon
Remember Sam Mahon’s infamous statue of Nick Smith?
Sam Mahon, is an artist and author, a straight shooter, and one of the staunchest critics of ECan and anybody who pollutes the public’s water. After the National government sacked the ECan council in 2010, Sam Mahon sculpted Nick Smith’s head from cow dung. Smith famously responded “Sam there is absolutely nothing that you could do that would hurt my feelings”.
But in 2017 Nick Smith was offended.  Sam produced another artwork of Nick Smith, at over twice life-sized with the pant-less politician squatting and pooping into a glass of water.
It was reported Smith’s feelings were then hurt. On top that Sam Mahon then released a book “The Honourable Nick Smith and Me”.
One critic said of the book “It’s funny. It outlines how the take over of our water has happened over the years, why it’s now so polluted. It wasn’t an accident; it was entirely calculated.”So where to now?
Rivers and lakes – indeed the whole water resource – need many, many more Sam Mahons. 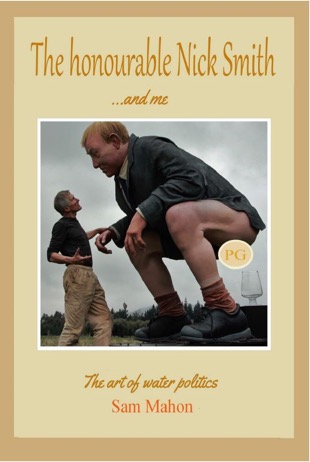 People Power Needed
The power must be restored to the people. But for that to happen, the people must get angry and active.
That requires a collective super human effort.
Super human?
The reason is that apathy is so dominant amongst individuals – and organisations ranging from Fish and Game to the Department of Conservation and others.
Fish and Game NZ?
Instead Fish and Game NZ has been undergoing musical chairs with the chairmanship, is currently under scrutiny in a government review and to top it off latest Fish and Game NZ chairman Ray Grubb has declared a policy of appeasement by sitting down over cups of tea with Federated Farmers NZ, an organisation unshakeable and totally unconvinced there is no water crisis.
Bad news for National
As for National’s Nick Smith, despite being defeated in his electorate in the 2020 election, he has the gall and arrogance to remain in Parliament as a list MP.
His presence does nothing for the National Party and more into negative mode.
But what of the current Labour government? In 2017 it erected billboards by Canterbury’s “stuffed” Selwyn River. The billboards showed a beaming leader Jacinda Adern in January 2017 promising “We will Clean up the Rivers.” 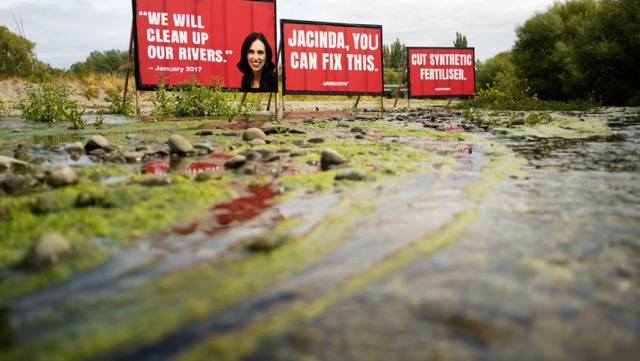 Over three years later, the public are being told by the Canterbury District Health Board to “treat every low-flowing river with caution.”
The public deserve much. much better. So do the rivers the public’s trout and salmon and native fish.
Where’s DOC?
Relative to “native fish” just where is the Department of Conservation in advocating for clean fish habitat?
DOC – Absent without Leave – AWOL.
So is government despite its 2017 promise “We will Clean Up Rivers!”
It needs to act now.
This entry was posted in Articles. Bookmark the permalink.