Rex Gibson, ecologist and secretary of the trout advocacy group, says that, in terms of international fly fishing visitors and New Zealanders fishing regionally throughout the country, the sport is a huge economic generator.

“Recreational freshwater sports fishing – directly and indirectly supports thousands of jobs – many in rural regions where unemployment is high,” he says.

Gibson says NZFFA has made a comment on the fishery’s value in response to a parliamentary select committee that has recommended trout farming be permitted following a petition from a former “ocean ranch” salmon farmer whose Golden Bay venture failed decades ago.

No recent firm study to reassess the value has  been undertaken, but Gibson says past estimates by the Department of Conservation and Cawthron Institute, extrapolated and updated to today, point to a figure worth well over $1 billion a year.

Twenty-two years ago, the issue of DoC’s Target Taupo in November 1998, stated the “New Zealand economy reaped around $750 million annually from activity associated with the freshwater fisheries”.

Taking into account increased earnings/inflation/business expansion etc over the past two decades that ‘around $750 million annually’ figure will have easily doubled by now to $1.5 billion.

“So our stating recreational trout fishing is ‘conservatively estimated to be worth of $1 billion annually to the NZ economy’ is totally justifiable and, if anything, an under-estimate,” says Gibson.

Similarly supporting the “billion dollar” figure was the Cawthron Institute’s assessment that the value of trout angling in 1991 – over 30 years ago – was up to a quarter of a billion dollars.

Gibson says there had been big increases in inflation and also enormous “trout industry” growth over the past three decades.

Trout fishing provides economic, cultural and health benefits, while trout themselves, which require clean, well-oxygenated water, also help protect the environment through Fish and Game’s advocacy work and by acting as ‘the canaries in the coal mines’ in terms of warning of declining river water quality,” says Gibson.

Having witnessed trout-farm sourced ecological disasters in the USA and Europe, many trout fishing bodies, including Fish and Game NZ, have grave fears that commercial trout farming is likely to cause immeasurable, irreparable harm to the public’s trout fishery because of :

“And at the end of the day, trout farming lacks economic justification with the product of farmed trout being mediocre in comparison to wild trout; and trout farms requiring intensive venture capital, high risks and offering marginally economic returns. Such projects will inevitably require high taxpayer funded ministerial input to deal with disease, monitoring and environmental problems.”

Gibson says a trout caught – and often released – by an overseas tourist or domestic sports fisher, is effectively worth hundreds of dollars a kilogram to the economy, with all the ancillary tourism and sports-related costs factored in, “but farmed trout may not even sell as much as farmed salmon current at $34 per kilogram.”

Gibson, an ecologist, said in the NZFFA’s executive ranks were high qualified people in areas such ecology, aquaculture, resource planning and micro-biology to name a few.

<c> An American fly fisherman – “a trout caught – and often released – by an overseas tourist or domestic sports fisher, is effectively worth hundreds of dollars a kilogram to the economy” – and it’s usually released – and thus recycled – to add again to the NZ economy. 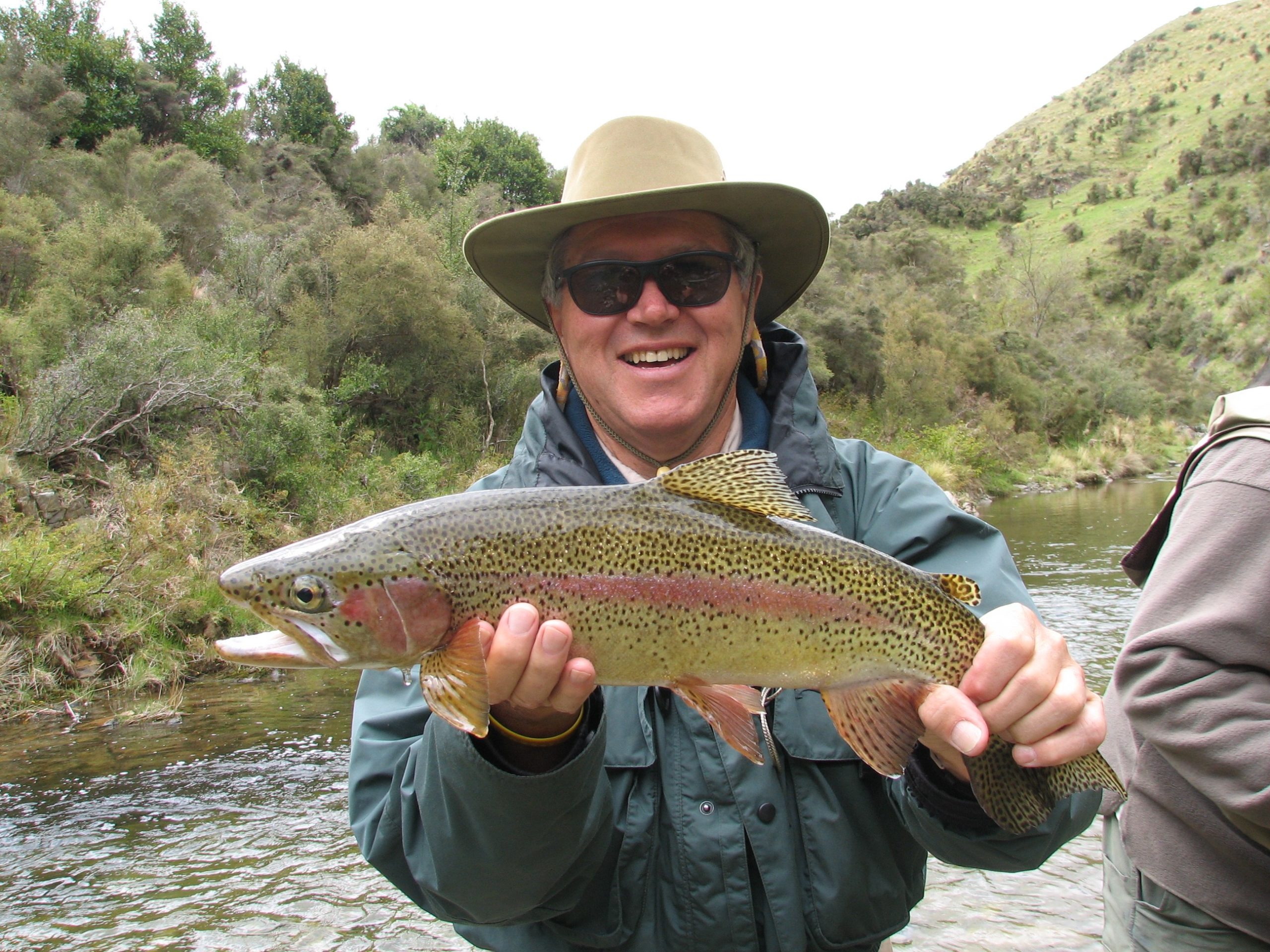