Just a Few Trout Flies Will Do

Posted on 23/09/2020 by Tony
by John McNab
One of the classics in fly fishing books is Englishman Franks Sawyer’s “Nymphs and the Trout”. Frank Sawyer in the 1940s and 1950s, became the father figure of nymph fishing and successor to the immortal  G E M Skues of the 1920s.
Read Frank Sawyer’s book and take in that Frank Sawyer used only four nymph patterns – the Pheasant Tail, Grey Goose, Killer Bug and Bowtie Buzzer. Not 104 or 44 trout flies, but just four!
Worth noting is all of the four flies are simple creations. The Killer Bug for instance, is  heavily weighted with a double even covering of wire and the body simply darning wool of a pinkish – fawn shade wound around the hook.
The Pheasant Tail, well known in New Zealand is simple to tie made from cock pheasant tail herl and copper wire. The Grey Goose uses a herl or two from the wing feather of an “ordinary farmyard grey goose” of “a lightish grey, green, yellowish appearance,” ribbed with a gold coloured wire.
Even further back and in New Zealand was Captain G D Hamilton who about 1900 fished the Manawatu River at Dannevirke. He used just five flies which incorporated only “three colours of feathers and dubbing.”
These masters, Captain Hamilton and Frank Sawyer believed in concentrating on just a relatively few patterns. As American fly fisherman/author Art Lee put it “An obsession with matching the hatch and fly pattern rather than fly presentation wastes hours of fishing time as devotees change flies every twenty seconds to find the right pattern.”
Then Art Lee in emphasis added  “no fly is ‘right’ unless it’s fished correctly.”
In other words “presentation” of the fly is of far greater importance than pattern.
Perhaps if I had to limit myself to two patterns of the three categories of nymph, dry fly and fly lure they might be:-
Nymphs
Hare and Copper: What does it imitate? I don’t know, but it certainly catches trout in sizes ranging from 8 to 16.
Pheasant Tail: Probably imitates a dominant mayfly (deleatidium). Great in sizes 10 to 18.
Dry Flies
Cicada imitation. Wonderful in mid-summer.
Parachute Adams: Great general mayfly imitation, sizes 12 to 14.
Lures
Woolly Bugger (Olive) Excellent streamer sizes 4 and 6 and in 8,10 and 12, a damsel fly imitation for lakes.
Hamill’s Killer.  Great fly lure anytime, anywhere, day or night and doubles as a great dragon fly larva imitation for lakes.
But I have to admit, I don’t restrict myself to six patterns. I have one or two that I pull out when a fish inexplicably refuses my favourites.  But the basic message is don’t spend time snipping off and tying on flies and not fishing your fly.
© Olive Woolly Bugger 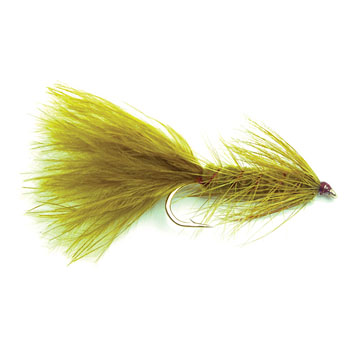 2 Responses to Just a Few Trout Flies Will Do