The New Zealand Federation of Freshwater Anglers NZFFA is appalled that the largest and best resourced regional council in New Zealand should propose rate increases of 24% or 18% to meet its obligations under the August 2020 National Policy Statement for Freshwater Management.

Over the past two decades, Ecan’s management of the region’s freshwater could best be described as “active mismanagement”.  Ecan facilitated the region’s massive irrigation development in order to increase GDP while disregarding the nitrate pollution they knew would inevitably occur.

The Ecan Act (2010) cost Cantabrians their recreational fisheries, pristine surface waters, and aquifers as the region’s freshwater was passed to irrigation and “dirty dairying”.

Ratepayers lost access to the Environment Court, the right to democratically elect regional councillors, and trust in their (?) regional government.

Ecan’s management of farm environment plans based on OVERSEER and Good Management Practice (GMP) is the justification for the proposed rate increase. The Ministry for the Environment is still determining if OVERSEER is a suitable regulatory tool.

Why should long suffering rate payers fund a mess that is due to Ecan’s poor environmental management and intensive farming? The irrigations schemes were already subsidised with over $400 million of taxpayer’s money.

Ecan’s record is proof that this council is not able to manage the region’s freshwater. There is no surety that more money would make any difference.

The only fair solution is to let the polluters pay. 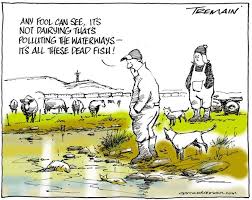