Dirty Truth About the Waikato River

Posted on 20/06/2022 by Tony
From Radio NZ
Radio NZ journalist Farah Hancock has lifted the lid on the reality of the Waikato River which from its pristine water outlet from Taupo, spilling over the thunderous Huka Falls a few kilometres downstream, then collects chemicals that result in an increasingly dirty river downstream.
“Dotted along the 425km of New Zealand’s longest river are towns, farms, dams, and outflows from sewage plants, dairy factories, meatworks and a pulp and paper mill. Each of these affect the state of the river. By the time it nears its end at Tuakau Bridge tiny particles of dirt fill the water. ““
It’s become so dirty at that point that, If you’re standing up to your waist, you might not be able to see your feet.
“And it’s not just dirt in the river. Swimmers play Russian roulette with infection from faecal matter. Between 20 to 30 percent of the time, more than 50 of every 1000 people who use the spot are likely to fall ill.
“Nitrogen levels at Tuakau Bridge are in the worst 50 percent of all monitored river sites and phosphorus levels in the worst 25 percent. Both of these nutrients contribute to excess plant growth, which can lead to toxic algae blooms.
Wildly High Levels
The problems are entrenched. A report published by the Ministry of Works in 1956 describe “oil scum and turbid conditions” along the Hamilton river bank and bacteria counts at wildly high levels.
A 1956 Ministry of Work report shows the river was polluted by sewage and industry contaminants
Problems at Hamilton worsened when the city’s septic tanks were quietly desludged into the river.
The explosion in dairy farming has taken a toll.
“The outflows from sewage plants, dairy factories, meatworks and the pulp and paper mill, is tiny compared to what seeps in from surrounding land.”
More Cows
But the dairy cow population has increased markedly, particularly in the last 20 years.
In fact, town and industrial wastewater only accounts for 6 percent of the nitrogen in the Waikato River, while 61 percent comes from the way the land is used, which is mainly pastoral farming.
“Using information gleaned from consent monitoring and from river sampling, It has been estimated how much nitrogen and phosphorus is entering the river, and where it’s coming from.”
“But by the time the river reaches the sea at Port Waikato – and makes its way into the taps of Aucklanders – more than 7000 tonnes of nitrogen and 367 tonnes of phosphorus have been added to the background levels each year, doubling the natural level of phosphorus in the river, and more than doubling the amount of nitrogen.”
Footnote: For Full article go to
https://www.rnz.co.nz/programmes/in-depth-special-projects/story/2018845362/the-dirty-truth-about-the-waikato-river 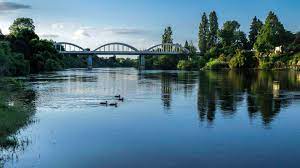 3 Responses to Dirty Truth About the Waikato River